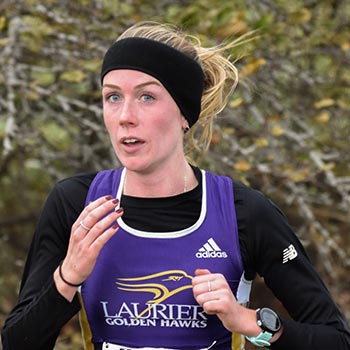 Laurie qualified for the world university championships Nov. 9 with an outstanding performance at the 2019 USport Cross Country Championships in Kingston, Ont. Laurie ran the eight-kilometre race at Fort Henry National Historic Site in 29 minutes, passing two competitors in the final 600 metres to place 12 out of 155 runners. Her finish represents the Golden Hawks’ best placement ever by a male or female cross-country athlete at the national competition.

Only the top seven finishers at USport qualify to represent Canada at the world university championships. However, some of the qualifying runners are also varsity track athletes and declined the opportunity to compete at the WUC to attend the USports Track and Field Championships, held during the same week in March in Edmonton.

This made a spot available to Laurie, who accepted the offer to compete against the best varsity cross-country athletes in the world.

“I knew that some of the qualifiers may decline the FISU race, which could allow me to run for Team Canada, but I didn’t want to get my hopes up,” says Laurie, a member of Laurier’s women’s cross-country team since 2016. “I am excited and honoured to have the opportunity to represent Canada.”

FISU’s world university cross-country championship race is 10 kilometres, a longer distance than the eight kilometres run in Ontario University Association and USport competitions. Laurie, who has not competed in a 10-kilometre race before, is excited by the challenge.

"I'm running longer distances in training and have found that my time is improving, so I think this could be a great distance for me,” says Laurie.

Laurie hopes to run the race in under 38 minutes.

“Kate has beat me in every race this year, so I try to use her to push myself along and stay with her,” says Laurie.

Laurie, who also competes on Laurier’s women’s track and field team, will divide her indoor workouts between cross-country distances and short-track runs. Outdoor training will consist of mile-repeat runs on snow and pavement, conditions permitting. Laurie has made an impressive recovery from a stress fracture on her left tibia in October 2018 and wants to avoid setback ahead of the WUC race.

“This is a once-in-a-lifetime opportunity and I intend to give it my all,” says Laurie.