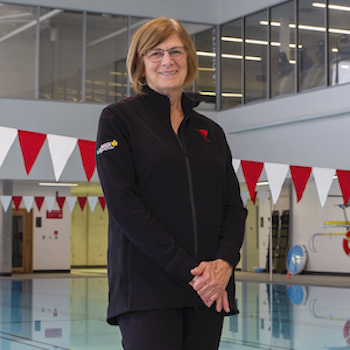 Brantford, ON – Patricia Kitchen, general manager at the Laurier Brantford YMCA, has announced her plans to retire in April 2020.

For the past 15 years Kitchen has been integral to the expansion of facilities and recreational programming at Wilfrid Laurier University’s Waterloo and Brantford campuses. After serving for six years on the joint Laurier/YMCA partnership planning and project team, in March of 2018 Kitchen was appointed the first-ever general manager of the new Laurier Brantford YMCA, with the task of implementing the operational plan of the award-winning facility.

The Laurier Brantford YMCA is the first facility in North America that is jointly operated to serve both as a community YMCA and as a university athletics and recreation centre. Since opening, membership has grown to approximately 3000 community youth, adult, family, and senior members, in addition to over 3500 Laurier and Conestoga College student users.

“Patricia Kitchen is a nationally recognized leader in recreation who has proven abilities to build staff teams who are empowered to do their best and are committed to community-oriented student-centered facilities and recreation programming,” says Peter Baxter, Laurier’s director of athletics and recreation. “Her contributions to the Laurier Department of Athletics and Recreation and its student experience are many, and she leaves a tremendous legacy.”

Kitchen’s affiliation with Laurier began in May of 2005. During her tenure at the university she has been involved in several important athletics and kinesiology infrastructure initiatives. She also has a longstanding affiliation with the Royal Life Saving Society (RLSS) at the provincial, national and international level. Her contributions to the RLSS were officially recognized in 2016 when she received the HRH Prince Michael of Kent 125th Anniversary Certificate of Merit from the Royal Life Saving Society.

Prior to coming to Laurier, Kitchen held posts at George Brown College and Western University.

“Sport, recreation and healthy living have been my passion and I have been fortunate to have a career in that field,” Kitchen says. “I am thankful to Laurier for giving me opportunities to be challenged and engaged in a variety of roles. This most recent opportunity, to build the foundation for the partnership between Laurier and the YMCA in the Laurier Brantford YMCA, has been exciting and rewarding. I have enjoyed working with my staff team as we strive to provide the best experience for students, members and the Brantford community.”

The search for the next Laurier Brantford YMCA General Manager will begin immediately. An event to honour Kitchen, including a look back at her contributions to Laurier and the YMCA, will be planned for the spring. Details will be announced once they are confirmed.