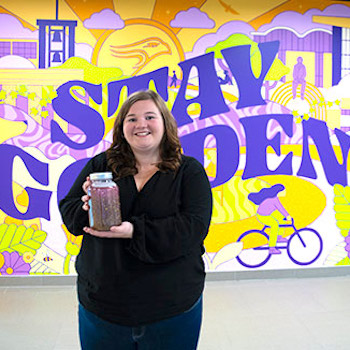 What does a glitter jar have to do with helping kids and young counsellors thrive at summer camp? Quite a lot, says Wilfrid Laurier University graduate student Lindsey Feltis.

Feltis, a second-year master’s student in developmental psychology, says a jar filled with glitter, water and glue can represent swirling thoughts and emotions. Watching it settle can help people focus on the present and remind them to be kind to themselves. Having used mindfulness and self-compassion to overcome her own mental health challenges, Feltis is now researching how best to help children and youth use those techniques to flourish.

With classes and meetings being handled remotely due to the COVID-19 pandemic, Feltis successfully defended her master’s thesis on mindfulness and self-compassion training for children via Zoom from her home in London, Ontario in March. Her research presentation was followed by two hours of intense questioning from thesis supervisors Professor Kim Roberts and Associate Professor Nancy Kocovski, as well as Associate Professor Jennifer Roberston-Wilson, who served as an external reviewer, defence committee member Professor Alexandra Gottardo and Professor Bruce McKay, who chaired the defence.

Preparing for the thesis defence was undoubtedly stressful, especially amid the current global crisis, but heeding advice she gives to others, Feltis relied on self-compassion and mindfulness.

“Though my situation as not as dire as others – I am healthy and at home with my family – it doesn’t mean that I am not experiencing stress,” says Feltis. “Practicing gratitude has been helpful.”

Feltis was one of only 10 master’s students across the country to receive a 2019 Canada Graduate Scholarship to Honour Nelson Mandela, a prestigious designation for students conducting research in an area championed by the former South African leader – in Feltis’s case, children’s health.

Feltis has also been named a 2020 Laurier Student Teaching Award recipient is in the master’s student category.

But despite her naturally bubbly personality and history of good grades, Feltis hasn’t always found it easy to succeed and feel mentally healthy at school.

Struggling with Anxiety and ADHD

When Feltis was in high school in Kitchener, in the academically rigorous International Baccalaureate (IB) program, she often struggled with anxiety and self-doubt.

Her anxiety rose again when Feltis was in her second year of university, to the point it was interfering with her daily life. She reached out for help.

“I went to the Wellness Centre at Laurier and saw a fantastic counsellor who introduced me to self-compassion,” says Feltis. “Being kind and compassionate to others, that made sense. But saving some of that compassion for myself was a revolutionary concept for me.”

Feltis was also diagnosed with attention deficit hyperactivity disorder (ADHD) at age 20, which she realized had been fuelling her anxiety.

“I was getting anxious about things everyone gets anxious about, but with ADHD your brain gives you no breaks,” says Feltis. “When I was feeling anxious, upset or sad, those thoughts would spiral. Being able to de-spiral with self-compassion and other treatments has been awesome.”

Feltis is determined to use her experiences to help others, particularly children and youth. That’s why, after an undergraduate degree in psychology at Laurier, she decided to return for a master’s degree. She was thrilled when Roberts and Kocovski agreed to co-supervise her despite their different specialties. Roberts, an expert in children and memory, is a developmental psychologist. Kocovski, an expert in mindfulness, self-compassion and social anxiety, is a clinical psychologist.

Feltis’s master’s research examines the effects of mindfulness and self-compassion training on children and youth at Pearce Williams summer camp, near Lake Erie, which she attended for eight years as a camper and counsellor.

“Mindfulness is non-judgmental awareness of the present moment – being ‘in the now,’” says Feltis. “Self-compassion is the idea that we are as kind to ourselves as we are to our good friends and the people we care about.”

“Most of the research on the benefits of self-compassion has been conducted with adults. Lindsey’s work focuses on whether these benefits extend to children,” says Kocovski. “It was Lindsey’s idea to carry out this research at summer camp and she worked hard to make that happen. Disseminating this program to adolescent camp counsellors who then deliver it to children at camp is a very unique model.”

With the help of her supervisors, Feltis spent the first year of her master’s adapting the Mindful Self-Compassion program, developed by American psychologists Kristin Neff and Christopher Germer, for a younger audience.

During the summer of 2019, Feltis and an undergraduate research assistant, Ashley Siegel, delivered two forms of training to Pearce Williams counsellors, who are mostly high school students, with some in university.

Feltis’s training included an introduction to the concepts of mindfulness and self-compassion as well as suggested activities to share with campers, such as the glitter jars, decorating rocks with self-compassion reminders, writing compassionate letters to themselves, and leading discussions about topics such as how kids can be kind to themselves. The counsellors also received self-care training.

“Camp counselling is one of the best jobs ever. It’s also a really demanding job,” says Feltis.

For five weeks, Feltis stayed in residence as a researcher, observing camp activities and surveying both campers and counsellors. Her results indicate the mindfulness and self-compassion training had benefits for counsellors.

Ready for a Future of Helping Kids

In addition to her research, Feltis helps children and youth in other ways. At Laurier, she assists with research at Roberts’s Child Memory Lab and supervises undergraduate assistants. Outside of university, she is a child and youth counsellor at Safe Haven Youth Shelter in Kitchener and a workshop facilitator for One Girl, a social enterprise that aims to empower girls. She is also a volunteer with Lutherwood Children's Mental Health Services.

“Self-compassion is one of the reasons I’m able to be busy, because in addition to living a wonderfully fulfilling life, I also prioritize self-care,” says Feltis. “If there are moments when I want to have hot chocolate and watch Netflix, I do that because I know that being kind to myself is going to make me better when I go back to work or school.”

Late last year, Feltis accepted the position of director at Pearce Williams camp, a full-time position that has started differently than planned as a result of the COVID-19 pandemic.

“I’ve been hosting live programming, such as ‘Name that Tune’ and trivia, through social media for our past campers,” says Feltis. “It’s been well received by campers and their families and meets the need for social connection and fun during an otherwise stressful time.”

During the next few years, Feltis plans to complete a doctorate and become a clinical child and youth psychologist.

“Lindsey will be able to achieve her goal of supporting children, adolescents and families,” says Roberts. “She is highly skilled in all aspects of research, qualitative and quantitative, and has drive and leadership skills. I look forward to seeing what initiatives she develops in the future.”