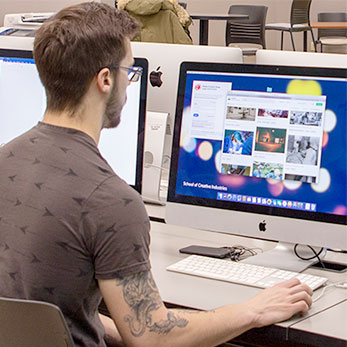 The media industry has changed more in the 15 years since Wilfrid Laurier University launched its Digital Media and Journalism program than during the century before it.

From ever-evolving technology to the way society consumes its news, Laurier’s Digital Media and Journalism program has worked hard to stay ahead of the changes, ensuring that graduates have the necessary skills for a career in media. The program is marking its 15th year in fall 2020 as Laurier’s Brantford campus winds down its 20th anniversary celebrations.

Digital Media and Journalism emerged as a way for the Brantford campus to develop its core as a liberal arts school. The merging of practical skills such as interviewing and writing with an education focused on contemporary issues made the program a good fit for the young campus.

“A lot of journalism programs at the time had a strong emphasis on skills,” says Bruce Gillespie, Digital Media and Journalism program coordinator and associate professor. “To be able to bring theory into journalism practice, to teach students how to write about news but also keep in mind what scholarly research tells us about the challenges of journalism was innovative.”

The program also had the advantage of being located at Laurier’s downtown Brantford campus, surrounded by historically, municipally and culturally significant places.

Associate Professor emerita Sue Ferguson, one of the program’s first professors, saw the value of having an arts-based journalism program that teaches students how to analyze a situation, to simplify complex ideas and to write in creative ways.

“I think Laurier’s Brantford campus led the way for a transition of journalism programs in Ontario,” says Ferguson. “We were not ignoring the skills, but we were trying to do more. It was ambitious in lots of ways. It was important to teach the impact of what it means to be a journalist.”

Alumna Paige Desmond (BA ’08) arrived at Laurier planning to study in the Contemporary Studies program but jumped at the chance to join the newly developed journalism program when it launched in 2005.

“It was exciting to be part of a new program and I was lucky to have exceptional access to my professors because the program was so small,” says Desmond. “I appreciated that most of my courses were being taught by working journalists who knew the types of skills I would need to be successful. They helped me develop the kind of critical thinking necessary to do my job.”

Desmond joined The Sputnik, Laurier’s Brantford campus independent student newspaper, as an opinion editor and took on the role of editor-in-chief from 2004 to 2006. During her time at Laurier she also wrote a dedicated “campus life” column in Brantford’s daily newspaper, The Expositor. Since graduation, Desmond has worked at several Ontario newspapers and is an Ontario Newspaper Awards and Ontario Community Newspapers Association award winner. She currently works as a reporter with the Waterloo Region Record.

“The courses offered in Contemporary Studies helped me become a more well-rounded journalist because I developed a broader knowledge of politics, history, social justice and other crucial topics that allow me to be a more thoughtful reporter,” says Desmond.

The Digital Media and Journalism program had humble beginnings, much like Laurier’s Brantford campus, which opened in 1999 with 39 students. Today, the campus has grown to a population of about 3,000 students.

The early days of the program included an innovative partnership with Conestoga College that allowed third-year journalism students to attend the college campus to earn postgraduate diplomas in videography and public relations.

In 2014, the program evolved to place a new focus on multimedia and changed its name to Digital Media and Journalism. The program collapsed its streams – print, broadcast, new media and public relations – into a single multifaceted program that exposes students to the range of digital skills and practices required for careers in the media industry.

These practical skills augment the theoretical aspect of the program and help showcase the range of jobs that Digital Media and Journalism students can attain after graduation.

“Students are trained in clear communication and storytelling in a professional way across various kinds of digital media,” says Gillespie. “The skills you are learning through this Digital Media and Journalism program – good research, good writing, being good with deadlines, good people skills – these can get you a job anywhere.”

Laurier alumna Tara Jeffrey (BA ’08) is currently a reporter at the Sarnia Journal. During her first year at Laurier, Jeffrey started working at The Sputnik. She was pursuing career in teaching but switched during her second year when the journalism program launched. Jeffrey was a member of the program’s first graduating class.

“Joining such a new program was an amazing experience,” says Jeffrey. “We were such a small group – I think four of us in the first graduating class. Our learning environment was so hands-on, intimate and unique, with top-notch professors. We knew we were part of something special.”

Jeffrey, who enjoyed taking on court reporting, feature writing, and other journalism courses while at Laurier, landed a job at a daily newspaper before she graduated. When she was named Student Journalist of the Year by the Ontario Newspaper Awards in 2007, Laurier staff and faculty attended the ceremony to support her.

“My time at Laurier’s Brantford campus was such an integral part of my life and career,” says Jeffrey. “I can’t say enough about the professors who believed in me and allowed me to thrive in a career that has given me so much more than I could have imagined.”

Read more about the success of Digital Media and Journalism program graduates: