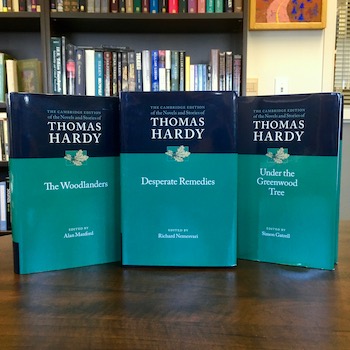 Thomas Hardy, whose works include Tess of the d'Urbervilles, Jude the Obscure and Far from the Madding Crowd, was the last of the major Victorian novelists. Wilfrid Laurier University Dean of Arts Richard Nemesvari is the general editor of a new scholarly series of Hardy’s 14 novels and four short story collections.

The first three books of the 18-volume series, Desperate Remedies, The Woodlanders and Under the Greenwood Tree, were published recently in a triple launch by Cambridge University Press. It will take another five or six years to get the next 15 books out at a rate of about three a year.

Though Nemesvari, a professor of English, has long been a well-respected Hardy scholar, being lead editor of The Cambridge Edition of the Novels and Stories of Thomas Hardy is a prestigious appointment – and a big job.

“I was proud to take it on because this will be a major contribution to Hardy scholarship,” says Nemesvari. “Hardy continues to be an important author people keep returning to. These scholarly editions will give international scholars the foundations they need for serious work.”

The Cambridge editions are no lightweight paperbacks. They begin with detailed critical essays and the text is extensively annotated so scholars can trace the evolution of the works. Like many Victorian writers, Hardy’s fiction was first serialized in magazines before being published as multi-volume first editions, then single-volume editions, American editions, collected editions and so on.

“In each case, Hardy would make changes,” says Nemesvari. “It’s important for scholars to know which version they’re reading, because Hardy’s texts are always fluid.”

The new editions also include explanatory notes and illustrations from the various editions.

“This is an attempt to create something that will give people who study these books information that’s not collected anywhere else,” says Nemesvari. “It will also raise Laurier’s profile. Cambridge University Press is an international press and anyone using these books will see the Laurier name.”

Nemesvari personally edited the new edition of Desperate Remedies, including writing a 70-page introduction. He will also co-edit the forthcoming edition of Wessex Tales.

The remaining volumes of the series will be edited by other Hardy scholars in Canada, the United States, the United Kingdom and Australia, but Nemesvari will oversee the entire project as general editor. With an editorial advisory board, he selected volume editors, created guidelines for them and put together a proposal for the publisher. Going forward, he will liaise with the publisher and review each volume.

“Being named general editor for this series is a recognition that I’m trusted in the Hardy community to get important work done,” says Nemesvari. “When the project is finished, I’ll feel I’ve accomplished something as a Hardy scholar.”