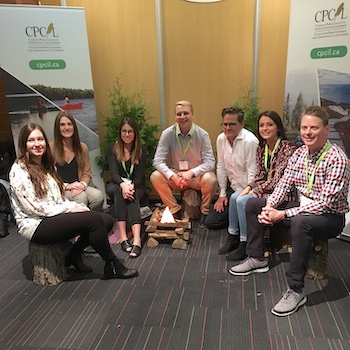 Parks aren’t just pleasant places – they have ecological, human and educational benefits. To learn more about and share their knowledge on parks, a group of seven Wilfrid Laurier University Geography and Environmental Studies students and faculty recently travelled to Quebec City for a major national conference.

“It was an invigorating three days of connection, collaboration, and contemplation as students learned about a wide range of topics critically important to the future of parks, protected areas and cultural sites,” says Lemieux. “Students participated as youth ambassadors, which allowed them to meet other students and practitioners working on conservation issues. These opportunities don’t exist in the classroom and are important to their personal and professional development.”

“Students participated as youth ambassadors, which allowed them to meet other students and practitioners working on conservation issues. These opportunities don’t exist in the classroom and are important to their personal and professional development.”

Laurier co-sponsored the youth delegation, which met just prior to the conference. The youth session was a highlight for the Laurier students who participated.

“It gave us a chance to connect with youth who are in similar fields and have similar interests,” says Madeline McFadden, a second-year Master of Environmental Studies (MES) student.

Catherine Reining, who recently completed her MES and is now Laurier’s human geography lab coordinator, was part of a different pre-conference workshop led by Parks Canada and the Canadian Parks Collective for Innovation and Leadership (CPCIL).

“The idea is to get practitioners, academics and other leaders in the field together to see if we can build a pan-Canadian research network for parks and protected areas,” says Reining, who both participated in the workshop and helped facilitate it. “It was a great opportunity to contribute to the bigger conversation, make some connections and get involved in the practitioner side of things."

Reining presented her own research on the restorative health benefits of protected areas during a breakout session at the conference. In 2016, she spoke to 467 visitors to Pinery Provincial Park, using both a tablet-based survey and open-ended interview questions. After analyzing the results, she concluded that spending time in parks has substantial benefits to mental and physical health and well-being.

Reining found the type of natural environment – whether beach or forest – doesn’t matter in terms of its restorative effects. What matters most is the ecological integrity of the environment – that is, the quality of the site, including how naturally rich the species and ecosystems are.

“Parks have a need to balance ecological integrity with visitation, so that was an important finding,” said Reining. “As we increase visitation, which we want because of the benefits parks provide, we are also at risk of disrupting the environment and damaging the ecological integrity. We need to educate people so they understand the importance of the environment they’re in.”

“Catherine’s presentation was very well received,” says Lemieux, noting that Reining will receive a Gold Medal for Academic Excellence: Research at her upcoming convocation. “It initiated conversation and reflection amongst the audience and even discussions on next steps related to her research.”

Some of the other Laurier students also found the conference benefited their research. McFadden is part of a Canada-wide research project led by Elizabeth Halpenny (BA’92), a Laurier alumna who is now an associate professor at the University of Alberta. The event gave McFadden a chance to meet Halpenny in person for the first time.

For her thesis, McFadden is speaking to stakeholders connected to Pinery Provincial Park and Bruce Peninsula National Park about managing the risks of natural hazards such as tornados and forest fires. She will analyze interviews with people such as park operations managers, emergency management officials and municipal staff to discern how effectively they are communicating amongst themselves to prepare for emergencies. Other researchers are conducting similar case studies across the country.

“We’re in a time of climate change when these natural hazard events are starting to increase in intensity and frequency, so making sure we have a plan for when these events do occur is essential,” says McFadden.

“It was also inspiring to hear professionals talk about how we’re going to fix the problems we’re faced with, not only in Canada but on a global scale.”

Ryan Brady, who is in his fourth year of Environmental Studies, is doing his honours thesis on Pinery visitors’ perceptions of ticks and Lyme disease. With research partner Jessica Kaatz, an MES student who also attended the conference, he surveyed visitors on topics such as whether the threat of ticks affects the activities they engage in and how educated they felt about ticks and Lyme disease. He and Kaatz are now analyzing the data under Lemieux’s supervision. He says it was useful to attend his first-ever conference to understand how to present effectively, something he expects to do in the future as a prospective graduate student.

“It was also inspiring to hear professionals talk about how we’re going to fix the problems we’re faced with, not only in Canada but on a global scale,” says Brady. “I’m thankful for the privilege of listening to some of the great speakers and taking that information back with me.”

Raluca Oprean, another Laurier MES candidate, also participated in the conference. Her research focuses on how new Canadians perceive and interact with nature in parks.

“While the conference was only three days, it will have a lasting impact on student learning, perhaps more so than a 12-week lecture-based course,” says Lemieux. “As the conference was primarily geared towards professionals and contemporary policy and management problems, it provided the opportunity for students to actively engage in real-world discussions. This will certainly foster a deeper understanding of how they can utilize what they have learned about conservation in their future workplaces.”

The students’ participation in the conference was supported by CPCIL and by Laurier’s McMurry Research Chair in Environmental Geography, Dean of Arts, Office of Research Services, and Graduate and Postdoctoral Studies.