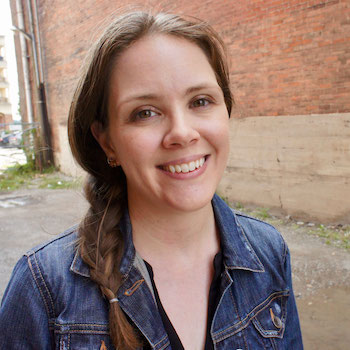 Quick. Think of a person who is homeless.

Did you picture a single, older man on the street? The fact is, young women are one of the fastest-growing yet least-studied groups of people who don’t have a home. Some are indeed on the street but others are couch-surfing, living in shelters or in other precarious situations. And Wilfrid Laurier University Assistant Professor Erin Dej says their challenges don’t necessarily end when they find housing.

Dej, a member of the Department of Criminology based at Laurier’s Brantford campus, has been researching homelessness for over a decade. She was recently awarded a Social Sciences and Humanities Research Council of Canada grant to lead research on young women’s experiences of social exclusion as they exit homelessness.

“Saying, ‘Check, we’re done’ once you have a roof over your head – that’s not enough,” says Dej. “Quality of life, social integration and inclusion are key components, or else people often just keep cycling in and out of homelessness.”

Working with colleagues from York University, McMaster University and the Centre for Addiction and Mental Health, Dej is investigating isolation and loneliness in young women exiting homelessness, how their experiences might differ from those of men and how these factors may affect housing stability.

“Many young women exiting homelessness have children,” says Dej. “Though sometimes they have custody and sometimes they don’t, children are an enormous part of their transition. When you have young children, it can be difficult to even leave the house, so if you don’t have a network of people supporting you, or if you lose that network once you leave homelessness, how does that affect you?”

“Saying, ‘Check, we’re done’ once you have a roof over your head – that’s not enough. Quality of life, social integration and inclusion are key components, or else people often just keep cycling in and out of homelessness.”

Another issue is that young women experiencing homelessness are highly vulnerable to sexual exploitation and victimization.

“Many young women experience trauma both before and while experiencing homelessness,” says Dej. “Once they’ve left homelessness and they’re not busy figuring out where they’re going to rest their head that night, they have more time to reflect on the trauma they’ve been through. That can be a really difficult time, so how does it impact their transition out of homelessness and what kinds of supports do they need?”

What’s more, some young women may be moving out of homelessness into situations that are violent or dangerous, such as if they move in with abusive partners, says Dej.

The Impact of Loneliness

In an increasingly disconnected society, loneliness affects a large swath of the population, negatively affecting quality and even length of life – some research has found social isolation comparable to smoking 15 cigarettes a day. A recent Canadian survey found Generation Z to be the loneliest generation and that young women, regardless of housing status, are most likely to feel isolated and alone, says Dej.

People transitioning away from homelessness may actually be leaving behind supports, ranging from drop-in programs for homeless youth to friendships with other people experiencing homelessness, says Dej.

“A lot of folks talk about having to disconnect from their street friends if they want to stay sober or just want a fresh start, but they don’t know how to find a new community and they miss those friendships.”

"The assumption is that you’ll make friends with the people around you. But that’s often challenging even for people who are on the same socioeconomic level as their neighbours."

The Housing First model increasingly used in Canada, where people receive immediate access to housing and wrap-around supports, has many benefits – however, an unintended consequence may be an increase in loneliness, says Dej.

“The original model for Housing First suggested it should be scattered housing, so as not to create exclusionary areas in a city,” says Dej. “While the model includes supports, what often gets lost when trying to make sure someone keeps a roof over their heads is, ‘Let’s make sure you have some friends.’ The assumption is that you’ll make friends with the people around you. But that’s often challenging even for people who are on the same socioeconomic level as their neighbours. And loneliness can make it hard to maintain housing over the long term.”

Social inclusion also has a cultural dimension that is often not adequately considered, says Dej.

“Indigenous understandings of belonging and kinship, for example, shape how social inclusion and exclusion is experienced by young Indigenous women.”

Dej’s research, which focuses on people aged 16 to 24 who identify as women and have experienced homelessness for at least six months, will be carried out in partnership with two community organizations in different-sized southern Ontario cities. The organizations, which serve youth experiencing homelessness, will help recruit participants, provide space for interviews and focus groups, and provide mental health supports to participants during and after research sessions.

"Homelessness is not inevitable. There are countries such as Finland that have essentially eradicated chronic homelessness. We have homelessness because we as a society accept homelessness – and I think it’s unacceptable.”

“Given the vulnerability of the population we are studying, peer facilitators will be able to capture data and provide participants with a sense of ease not otherwise possible,” says Dej. “It will also help them develop skills, give them opportunities and highlight the expertise of young women who have experienced homelessness.”

Near the end of the project, the community partners will help disseminate research findings by co-hosting events that provide opportunities for service providers, community stakeholders, local government and youth to learn about the research and discuss action. The researchers also plan to produce a plain-language report for policy makers and other stakeholders.

“At a macro level, I hope that we recognize the strength and resiliency that young women have and the barriers that we as a society continue to put in their way,” says Dej. “In all my work, I strive to do what I can to push us toward preventing and ending homelessness in Canada. Homelessness is not inevitable. There are countries such as Finland that have essentially eradicated chronic homelessness. We have homelessness because we as a society accept homelessness – and I think it’s unacceptable.”