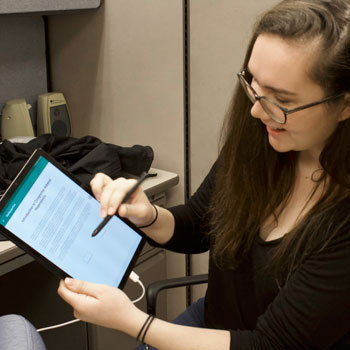 Last January, urologist Dr. Luis Braga and his team at McMaster Children’s Hospital in Hamilton enlisted the expertise of Chính Hoàng, a professor in Wilfrid Laurier University’s Department of Physics and Computer Science, to develop a mobile application for parents of babies born with a rare genetic condition, Congenital Adrenal Hyperplasia (CAH).

The disorder affects one or more hormones, often sex hormones. In genetically female babies born with CAH, their adrenal glands produce excess male steroid hormones, which can result in what is described as “ambiguous genitalia.” Parents are given the option of whether to pursue surgery or not.

“It’s a lot of information parents are facing right from birth and it’s sometimes a life-threatening condition,” says Melissa McGrath, Braga’s research assistant. “The thought behind the app was to put all of the credible information in one place so parents aren’t forced to go online looking for information. They could go through the app at home at their own pace.”

To create the app, Hoàng recruited six students: Cevdet Acuner, an online Master of Computer Science student, as well as Randy Dang, Jae Gorospe, Braydon Kains, Fafa Ke and Stephanie Pitman, all four fourth-year computer science undergraduate students. The group has been working throughout the winter semester to create an app that meets the hospital’s goal of helping parents learn general information about CAH and explore the pros and cons of surgery.

Since the condition is rare, many family physicians don’t know much about it. The application could also be used to help parents educate health care practitioners at smaller hospitals and clinics.

“Even at an emergency room in a smaller city, they may not understand the full complexity of the condition,” says McGrath. “If they have this wealth of information at their fingertips, parents can use it to educate people.”

“After three co-op terms, I’ve realized how important these projects are for my future. It’s experience employers are really looking for.”

“I never really knew how difficult it would be to try to communicate what is feasible,” says Gorospe. “But learning how to explain and negotiate will definitely help me down the road if I want to be a software developer.”

Creating the app is also an opportunity for Laurier students to apply the mobile development skills they’ve learned in class to a real-world project. Half of the group is working on the iPhone app, while the other half is working on the Android app. Members of the group divided responsibilities, with some working on the app’s architecture, some on its user interface and some inputting data.

“I want to get into mobile development and I thought this would be a really great way to see what the world of development is like before jumping right into it,” says Pitman. “It’s also a neat way to meet more students in the program. It’s a really cool group.”

Through the project and Hoàng’s iPhone Application Programming course, Acuner, who is studying toward his Master of Computer Science online, was able to hone his mobile development skills. When he’s not studying, Acuner is an IT programmer in the trucking industry, tracking where trucks are, their estimated arrival time, invoices and other information. He recently pitched the idea for a mobile app to his company’s managers and has begun work on it using his newfound skills.

Having tangible experience working on a mobile application also looks great on the resumes of those entering the workforce for the first time.

“After three co-op terms, I’ve realized how important these projects are for my future,” says Ke, who is double majoring in computer science and business. “It’s experience employers are really looking for.”