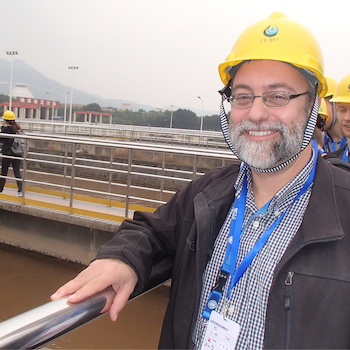 In the 1970s and ‘80s, people used rotary dial phones, film cameras and bunny ears on cathode ray TVs. These technologies have changed radically. But in most places, wastewater treatment remains much the same as 40 or 50 years ago. Wilfrid Laurier University professor Scott Smith says we’re overdue for an overhaul.

“Our current infrastructure was designed for lower populations and less stringent criteria, so it’s meeting the end of its design life,” says Smith, a professor in the Department of Chemistry and Biochemistry. “That means that now is a good time to reimagine how we do wastewater treatment.”

Knowledge and mindsets have shifted too. In the 1970s, regulators were just starting to get serious about limiting obvious forms of water pollution. Today, people are concerned about tiny and trace contaminants such as pharmaceuticals and microplastics. Some are even starting to think about recovering resources from what we flush down the toilet.

“There’s good stuff in there, looks and smell notwithstanding,” says Smith.

There are three types of resources that can be recovered from sewage: energy, what Smith calls “specialty things,” and nutrients.

First, energy: “You can burn the stuff,” says Smith. People have long dried and burned dung for fuel, and some industrial facilities do the same on a larger scale.

“Specialty things” refers to commodity chemicals such as humic acid, an organic compound with commercial value that researchers are currently working on recovering from wastewater.

“Our current infrastructure was designed for lower populations and less stringent criteria, so it’s meeting the end of its design life. That means that now is a good time to reimagine how we do wastewater treatment.”

Neither energy nor commodity chemicals are among Smith’s areas of focus but he is an expert in removing and recovering nutrients from aquatic ecosystems and wastewater.

Manure makes good fertilizer because it’s rich in nutrients such as phosphorus, but too much of a good thing can be detrimental. Nutrients from fertilizers can run off the soil and into bodies of water, contributing to harmful algal blooms.

Phosphorus is one of the major components of commercial fertilizers. It’s also a big part of what humans and animals excrete. Efforts to control phosphorus in waterways have been underway in Canada since the early 1970s but nutrient runoff continues to be a problem and the heating climate is contributing to worsening algal blooms.

To help get enough fertilizer onto farmland without allowing too much of it to run off into water bodies, Smith has been working on extracting phosphorus from sewage. Compared to spreading sewage sludge on fields, pure phosphorus is safer because it’s free of toxins and pathogens as well as being less prone to runoff. Smith’s research could also help solve the problem that phosphate rock, the source of most phosphorus today, is a non-renewable resource.

“In wastewater, phosphorus is mostly in the urine. So one example of reimagining water treatment would be to do urine separation. We talk about it as getting the ‘P’ out because that’s the chemical symbol for phosphorus.”

“In wastewater, phosphorus is mostly in the urine,” says Smith. “So one example of reimagining water treatment would be to do urine separation. We talk about it as getting the ‘P’ out because that’s the chemical symbol for phosphorus. If we caught it all, the amount of phosphorus that we could get from wastewater would be about 20% of the annual amount mined globally. If we were able to recover phosphorus from animal waste too, it would take that number up to about half.”

Urine can be separated from solid waste by using dual-chambered toilets with separate outflow pipes. If these were widely used, it would be much easier to extract phosphorus from wastewater, says Smith.

Infrastructure would have to be upgraded to accommodate three pipes coming out of houses – one for urine, one for solid waste and one for grey water from sinks – but the payoff would be more efficient water treatment.

Another major change would be decentralizing water treatment.

“Instead of doing all the water treatment at one facility, for large apartment buildings or places like universities, you could have treatment happening on site, at least to some degree, before it goes off to a more centralized facility,” says Smith.

“Instead of doing all the water treatment at one facility, for large apartment buildings or places like universities, you could have treatment happening on site, at least to some degree, before it goes off to a more centralized facility.”

Not only would this enable urine separation pilot projects without changing a whole city’s infrastructure, decentralized treatment would reduce the load on municipal water treatment plants currently under pressure due to population growth.

“Only a handful of substances are currently regulated,” says Smith. “But there are new advanced technologies that can remove more contaminants such as pharmaceuticals and nanoparticles.”

Some of the infrastructure changes Smith is talking about would be expensive and time-consuming. But it is possible to start with easier improvements.

“If you really want to go to low levels of phosphorus, you need to use chemical treatment,” says Smith.

Other researchers have proposed recovering phosphorus from sewage sludge by using an acid to dissolve the phosphorus-containing minerals. Scott is working on an alternative that involves adding a base rather than an acid to create chemical reactions that isolate both phosphorus and iron. His method could potentially directly create a fertilizer that contains phosphorus, magnesium and nitrogen.

“The advantage is, we’d be able to capture the iron and the phosphorus so we can reuse the iron to do the water treatment and convert the phosphorus to fertilizer,” says Smith, who is also working on other methods to isolate phosphorus.

An even easier change to implement is one Smith has helped usher in at water treatment plants in Canada and Australia. Currently, many plants add a chemical to remove nutrients from wastewater but they drip it in using something like a garden hose. Smith says using a spray nozzle or a vigorous mixing process are better options.

“You have to spread that chemical addition out so it contacts as much of the waste stream as possible,” says Smith. “Treatment plants have started to do that. It’s a small tweak that you can make to an existing process and it hardly costs anything.”

Though incremental steps such as these are helpful, Smith believes a wastewater treatment revolution will be necessary in the longer term.

“It’s easy to say, ‘We’ll do exactly what we did before but we’ll make facilities bigger,’” he says. “That’s not the way forward when there are smarter ways to treat water.”