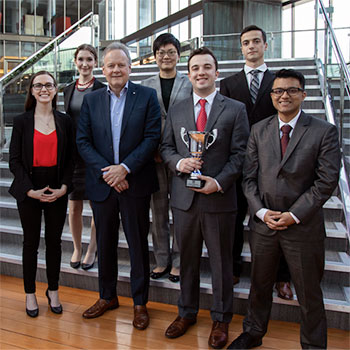 A team of students from Wilfrid Laurier University’s Lazaridis School of Business & Economics are champions of the Bank of Canada's fourth annual Governor’s Challenge.

Fourth-year students Cindy McCormick, Michael Davenport, Colleen Spencer, Andrew Foran and Tanzin Kabir won the challenge during an event in Ottawa on Feb 16. This is the second consecutive year a team from Laurier has won the national competition, which sees students present an economic outlook and monetary policy advice to the Bank of Canada.

“It was an honour to represent Laurier throughout the challenge,” says McCormick. “Placing first at the national level says something about the Laurier Economics program, our university and all of the hard work we put in.”

The Laurier team won an initial round of the Governor’s Challenge in November to advance to the final round.

“It was an honour to represent Laurier throughout the challenge. Placing first at the national level says something about the Laurier Economics program, our university and all of the hard work we put in.”

To prepare for each round, the team assessed the current and prospective economic climate in Canada, made projections of macroeconomic variables and discussed possible foreign and domestic economic risks.

Based on their analysis, the team delivered a 15-minute presentation to a panel of senior executives from the Bank of Canada and private sector. The presentation was followed by a 15-minute question-and-answer period. Students advised on whether the bank should raise its key interest rate, lower it or leave it unchanged.

“The challenge tested the students’ knowledge and understanding of macroeconomic issues and monetary policy issues,” says Pang. “It’s a chance for Economics students to showcase their learning and skills.”

Eight months of hard work, preparation and some late nights led to the Laurier team’s win. The team first prepared recommendations for the initial Governor’s Challenge round in the fall. But economic conditions in Canada are continuously changing, with new data released regularly, so the team altered its model and recommendations for the final round.

The two weeks leading up to the national challenge were demanding for the students and included daily three-hour gatherings with Pang and Shiamptanis to practice their presentation.

“The challenge gave us the ability to take what we learn in the classroom and practically apply it. It’s the most relevant experience we have as we go into the job market.”

So, what did the team recommend to the Bank of Canada?

“Based on an analysis of the global economy and the Canadian economy, as well as a risk analysis, we recommended the Bank of Canada hold the interest rate at the current level of 1.75%,” says Davenport.

“The global economy and the Canadian economy are moderating,” says McCormick. “Our risk outlook, including Canada’s current trade position, led us to be more cautious in the recommendation.”

“The challenge gave us the ability to take what we learn in the classroom and practically apply it,” says Davenport. “It’s the most relevant experience we have as we go into the job market.”

“I’ve learned a lot of transferable skills, to communicate, think quickly and to be able to answer questions,” says Spencer.

The excitement and celebration didn’t end in Ottawa for Spencer. She leveraged the hands-on experience gained from the Governor’s Challenge to secure a job after graduation. Spencer has been offered a full-time employment opportunity with the Bank of Canada.