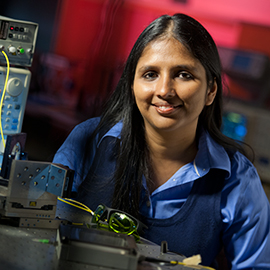 Ghose, a theoretical physicist, was named a TED Senior Fellow in 2018, which gave her the opportunity to deliver a talk from the TED stage. It’s one of many honours she has received, which include being inducted into the prestigious College of New Scholars, Artists and Scientists of the Royal Society of Canada.

An outstanding teacher as well as researcher, Ghose has also received a Laurier Faculty of Science Award for Excellence in Teaching. Her ability to make the most complex topics interesting and comprehensible comes to the fore in her November 2018 TED talk, Quantum Computing Explained in 10 Minutes. It was posted online in January 2019 and has been viewed more than 1.3 million times.

In both videos, Ghose discusses ways that quantum computers could revolutionize information science because of the ability of quantum bits to shift fluidly between zero and one, or be some combination of both, rather than being one or the other as regular bits are. One of the possible applications is better cryptography, which is the process of securing online data and communication.

“Quantum uncertainty could be used to create private keys for encrypting messages sent from one location to another so that hackers could not secretly copy the key perfectly, because of quantum uncertainty,” Ghose says in the TED video. “They would have to break the laws of quantum physics to hack the key.”

But if hackers could get hold of quantum computers, they would be able to able to hack any standard, non-quantum cryptography.

“A quantum computer could crack our best encryption protocols within minutes, whereas a regular computer or even a super-computing network today couldn’t do it given months of time,” Ghose says in the Nova episode.

Even more mind-bending is the possibility of teleporting information from one place to another without physically transmitting it.

“Sounds like sci-fi, but it is possible, because these fluid identities of the quantum particles can get entangled across space and time in such a way that when you change something about one particle, it can impact the other, and that creates a channel for teleportation,” Ghose says in the TED video. “My team is working on these possibilities by simulating a quantum network on a quantum computer.”

In addition to her quantum research, Ghose is passionate about advocating for diversity in science. She is founding director of the Laurier Centre for Women in Science and is among those around the world celebrating International Day of Women and Girls in Science on Feb. 11.

The day is important “to celebrate the contributions women have made to science and inspire the next generation of students of all genders to consider a career in science,” says Ghose. “Tackling global challenges will require our best and brightest from all backgrounds to participate in science. That participation will help to stimulate new ideas and address science questions from different perspectives.”