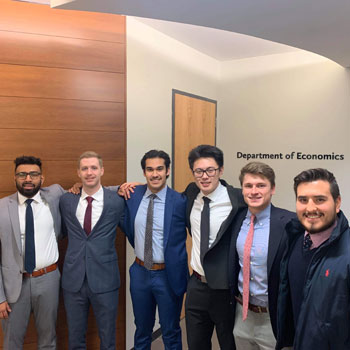 After competing against more than 100 students from 24 universities across Canada, a team of six Wilfrid Laurier University economics students have been chosen for the final round of the Bank of Canada’s Governor’s Challenge. This is the fifth consecutive year in a row that Laurier students have made it to the finals.

The team, along with four other top-performing teams from across the country, will present an analysis and recommendation on the Bank’s key interest rate to a panel of expert judges at the Bank’s head office in Ottawa in February.

“For this competition, students have to use all the skills, techniques, knowledge – everything they’ve learned so far – and apply it to a real-life policy analysis,” says Ke Pang, associate professor of economics in the Lazaridis School of Business and Economics and one of the team’s coaches. “All the training they get from the whole faculty is there to bring them up to this level. On top of that, our students are very engaged and motivated.”

The six fourth-year students, George Charron, Derek Han, Alejandro Lazcano, Nicshan Pirathaaban, Cameron Pizzacalla and Zach Zima, will compete against teams from the University of British Columbia, University of Calgary, Lakehead University and McGill University. The winning team will be named the Governor’s Challenge National Champion and will receive an award from Bank of Canada Governor Stephen Poloz at a ceremony. Laurier students have won the competition the last two years.

With the help of advisors, Pang and Professor Wing Chan, the team has been working since September to analyse and forecast the economy and come up with a recommendation that will keep Canada’s inflation rate stable and close to the 2% target. The team is proposing two interest rate cuts, down to 1.5% in the first quarter of 2020 (the rate is 1.75% now) and another in the second quarter of 2021 to 1.25%.

“The global economy is slowing down and, because Canada is a small, open economy, we rely on trade a lot and that affects how much we export,” says Pizzacalla. “Our economy is performing a bit below its potential so the two interest rate cuts will hopefully provide a boost and bring up our GDP (gross domestic product) growth.”

The students each earn a credit for their work preparing for and taking part in the competition, but the work is very challenging and the hours and stress involved make it feel more like the equivalent of two or three courses. Still, the experience is valuable for students and many who’ve competed in the past have gone on to graduate school or to impressive jobs in the private and public sectors, including at the Bank of Canada.

“The challenge was a deep learning experience that exposed me to a field that I hope to pursue in the future,” says Charron. “On top of that, it was the most challenging endeavour and the most gratifying one at the same time. I want to thank the coaches for being there every step of the way and the team for working so hard."