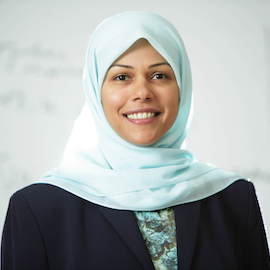 The prestigious Fulbright Scholar Program allows for top and highly promising scholars from around the world to spend time at academic institutions in the United States. Al-Abadleh will be going to one of the world’s top centres for air-quality research, where the late Sherwood Rowland led the discovery of the fact that chlorofluorocarbons contribute to the hole in the ozone layer – work that would earn him a Nobel Prize.

“To be a Fulbright Scholar presents me with a whole new avenue of knowledge acquisition and collaboration,” said Al-Abadleh. “Receiving this award is an enormous opportunity to learn from world-leading scientists as well as a recognition of the research my colleagues and I are doing now at Laurier.”

Not only will Al-Abadleh have a chance to work with top atmospheric chemists from UCI, she will have opportunities to network with others from the extensive, multi-campus University of California system. She will also have access to state-of-the-art research equipment and facilities.

Al-Abadleh will teach a graduate special topics course on environmental heterogeneous chemistry, based on a course she has taught at Laurier since 2006, and will likely give guest lectures at UCI and other California universities. Most of her time, however, will be devoted to fundamental scientific research on the chemistry of air pollution, especially ground-level ozone and inhalable nanoparticles.

Ground-level ozone, a major component of smog, has significant negative effects on human health as well as on vegetation. It is produced when volatile organic compounds, which can be natural or industrial, react with nitrogen oxides, which are primarily produced by the burning of fossil fuels. More ground-level ozone forms when temperatures are high, which means climate change is worsening smog.

Nanoparticles, which are too small to be caught by standard industrial measures to mitigate emissions, can come from a variety of sources. They can affect human health when they are breathed in and get lodged in the lungs and circulatory system, causing inflammation and disease. Nanoparticles also affect plants and animals.

“The study of environmental impacts of nanomaterials is still in its infancy, so there are many questions to answer,” said Al-Abadleh. “This is an example of how fundamental research can be extrapolated to real-world problems.”

Another area of Al-Abadleh’s research has to do with how solid surfaces interact with polluted air.

“If you have a polluted environment, you can expect that reactions will take place between pollutants and surfaces such as buildings, which can form new pollutants that people inhale,” said Al-Abadleh. “These types of studies are very important for urban areas, where a high concentration of cars, people and human activity is literally changing the air that we breathe.”

Being in California will give Al-Abadleh an opportunity to do research in different climatic and atmospheric conditions, with sea spray in the air and a mix of industries unlike Ontario’s.

“California is also a leader when it comes to green technology, cap-and-trade, and policies that impose tough targets on emissions from cars and power plants, so it’s a very unique site to be part of for a while,” said Al-Abadleh. “I am really looking forward to the knowledge exchange and cultural experience I will gain as a Fulbright Scholar.”

Al-Abadleh won Faculty Association Merit Awards at Laurier in 2012, 2016 and 2018. She has been the recipient of several research grants through the Natural Sciences and Engineering Research Council of Canada (NSERC) as well as research awards from Imperial Oil and a Young Innovator Award from Petro-Canada, and the Early Researcher Award by Ontario's Ministry of Research and Innovation (2011-2016), as well as a Women Who Inspire Award (for professional excellence) by the Kitchener-Waterloo Coalition of Muslim Women (2017), among many other awards. Al-Abadleh has co-authored several dozen peer-reviewed studies that have appeared in high-impact journals.

For more information about the Fulbright scholarship and other 2018/19 Laurier recipients, read the Laurier news release.