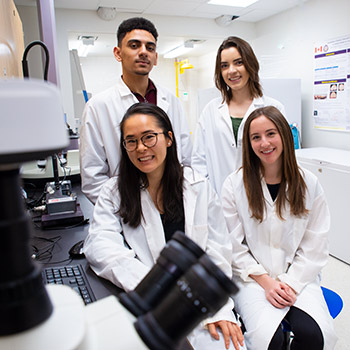 Back row: Carlos Khalil and Liv Cento. Front row: Andrea Chen and Rachel Goldfarb
Laurier’s BSc in Health Sciences is raising the bar, thanks to its students

Laurier’s BSc in Health Sciences is raising the bar, thanks to its students

The Health Sciences program at Wilfrid Laurier University has gained substantial recognition over the past five years. Every year, it attracts more and more talented, high-achieving students with big dreams of working in health care or research. In fall 2017, more than 60 per cent of the applicants to the program had averages of 90 per cent or greater and the program has had to be more selective in order to keep the program small.

Since its beginnings in 2009 on the university’s Waterloo campus, the program has expanded to include more professors who are both excellent teachers and cutting-edge researchers. The unique cell-to-society curriculum has grown alongside it. But the Health Sciences program has also shone in large part because its high-calibre students are acting as ambassadors for the program.

“Ultimately, what drew me here is its small cohort. I knew that meant I could interact closely with professors and students and take advantage of the program as a whole.”

“At Laurier, we’ve been ranked No. 1 in student satisfaction for three years running,” says Robb Travers, associate professor of Health Sciences and former chair for the program. “Health Sciences students really take on that Laurier identity and they end up really helping with recruiting new students. They’re happy, they see other students going on to successful next degrees, and they just really want to share that.”

Carlos Khalil, a third-year Health Sciences student who is already applying to medical school, has led the recruiting efforts, albeit unofficially. In his time at Laurier, he has recruited more than 35 students to the program – several of whom have top-tier averages in the high 90s – from his former high school and Coptic Christian community in Mississauga. They look up to him and take his word when he says if he had to do it all over again, he would definitely return to Laurier.

“Ultimately, what drew me here is its small cohort. I knew that meant I could interact closely with professors and students and take advantage of the program as a whole,” says Khalil. “The professors are very invested in their students. They know that education is not one size fits all. Because it’s not a huge program, they can dedicate a lot of their time and resources to their students and tailor how they teach to how you learn.”

Khalil became interested in medicine, specifically endocrinology, after watching someone close to him suffer from an endocrine disease. But his close relationship with Travers, who studies and teaches about the social determinants of health for those with HIV/AIDS, has also inspired Khalil’s interest in immunology. “More than anything, my professors have empowered me,” says Khalil. “Medicine used to be an interest, but now it’s a goal and I now have the tools I need to pursue it and succeed in it.”

As VP of Operations for the Health Sciences Students’ Association, Khalil helps organize the Conversations in Health event, which brings medical professionals from a range of fields to campus to speak to students about their careers. He is also the co-president of the Laurier Journal Club, dedicated to analysing current scientific research, and the founder and president of Change for X, a club promoting local charities.

Rachel Goldfarb, in her third year of the program, is an official student ambassador for Laurier. When she first visited Laurier, she was shown the campus by an ambassador.

“I thought, what a cool way to show off your school,” she says. “Anyone who asks me, I’ll talk their ear off about how much I love Laurier and my program. Being an ambassador seemed like an appropriate channel to put that to use.”

Goldfarb was very involved in extracurricular activities throughout high school and she was drawn to Laurier when she heard the university has more than 200 student clubs on campus. Since she started at Laurier, she has been juggling as many extracurriculars as she can manage. She volunteers with the Emergency Response Team, which provides first aid on campus throughout the year and at special events; Hillel, a Jewish student group on campus; and Bridging the Gap, a club promoting wellness and mental health awareness on campus. She is also a Supplemental Instruction leader, running tutoring sessions for students who need a bit of extra help, and a research assistant for one of her professors.

She has also been working for a developmental pediatrician at St. Michael’s Hospital in Toronto researching how best to support low-income families of children with developmental disorders. Thanks to this work, Goldfarb is interested in pursuing pediatric genetics and pediatric complex care in medical school, which she plans to apply to next year.

“Anyone who asks me, I’ll talk their ear off about how much I love Laurier and my program. Being an ambassador seemed like an appropriate channel to put that to use."

Andrea Chen was drawn to the Health Sciences program because its small size meant she could work closely with her professors on research. The fourth-year student was recently nominated by Laurier for a Rhodes Scholarship and hopes to pursue a thesis-based master’s next year. She plans to study global health and epidemiology, a topic she became fascinated with after studying the social determinants of health in third year.

“Health is not just determined by the lifestyle factors you might traditionally think of. There are other mediating factors, like your identity, culture and housing, and they’re all interrelated,” says Chen. “I find that incredibly fascinating.”

Chen helped Assistant Professor Todd Coleman with his research studying the predictors of HIV/AIDS and sexually transmitted diseases in men who have sex with men. That work prompted her to study the predictors of health in the lesbian, gay, bisexual and transgender community in a directed studies course. For her undergraduate thesis, she is studying the gaps in access to health care for lesbian and bisexual women compared to heterosexual women. She hopes to continue researching that topic in her next degree.

“With public health or epidemiology, you have that ability to make a larger impact, particularly to raise population health in vulnerable and minority populations,” she says.

Alongside her research at Laurier, Chen has worked as a research assistant for a family medicine centre in Kitchener and at a children’s rehabilitation centre in Toronto. She is also an executive with the Society for Undergraduate Research and Outreach club.

Liv Cento’s fourth-year thesis focuses on opioid use and depression in elderly Canadians and related factors, including loneliness, social isolation and alcohol use. Her research is inspired by her volunteer work with the Hospital Elderly Life Program at St. Mary’s General Hospital in Kitchener. She has been visiting elderly patients, especially those without family to check in on them, since Grade 12.

“When you’re in that environment and you’re dealing with these patients one on one, it’s very obvious what they’re going through,” she says. “It’s neat working on a research project that I can relate to in real life.”

"The professors truly care about your success. They remember who you are, they want to get to know you and they reach out if they have something to say. I just know I wouldn’t have had that kind of support at a larger university."

Cento has wanted to be a doctor since she was young and has recently applied to medical school for next year. She was drawn to Laurier because the small size of the program meant she could get closer to students, professors and staff.

“The professors truly care about your success. They remember who you are, they want to get to know you and they reach out if they have something to say,” says Cento. “I just know I wouldn’t have had that kind of support at a larger university.”

“In a sense, it feels a bit like high school, but in a good way. It still has that class vibe where everyone knows each other. You don’t get lost in the crowd.”

The size of the program makes it easier for professors to work one-on-one with students and better mentor them. “Our smaller program allows us to do a lot of interactive, small group work that you can’t really do in a great big class,” says Travers. “It makes for a more in-depth, intensive kind of learning.”

He has watched hundreds of students go through the program and go on to become physicians, academics, dentists, physiotherapists and nurses, among other careers. The department’s friendly culture and open-door policy have meant professors and students develop close relationships and many students keep in touch after they leave.

“It’s an absolute privilege working with these high-achieving students,” he says. “You can see the success that comes out of your mentoring.”