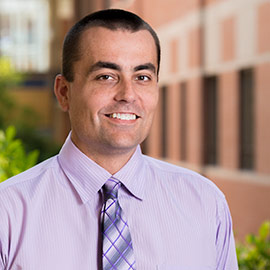 Bruce McKay, associate professor of Psychology, has been appointed Wilfrid Laurier University’s senior advisor to the provost and vice president: academic, beginning July 1, 2018 for a two-year term. In this role, McKay will serve as the academic lead on the development of programs for the recently announced Milton campus.

The Senior Advisor will join a number of unit leads from across the institution in support of the development of the Milton campus. McKay joined Laurier’s Psychology Department in 2008. He has been playing a key leadership role institutionally in the academic planning for the Milton campus. McKay has served as the associate dean: student services in the Faculty of Science for the past three years, where he led an in-depth analysis within the faculty, focusing on student retention and success.

The appointment of a senior advisor to the provost and vice-president: academic follows the province’s April announcement giving final approval and financial support towards Laurier establishing a campus in the Town of Milton. Building on its sector-leading expertise in Science, Technology, Arts and Mathematics, Laurier’s Milton campus will introduce complementary Engineering undergraduate programs linking students to highly skilled STEAM (Science, Technology, Engineering, Arts and Mathematics) opportunities. With an incoming class in Milton planned for fall 2019, the senior advisor will also play key role in establishing a range of existing academic programs in Milton.

McKay received his PhD in Neuroscience from the University of Calgary in 2006, followed by a postdoctoral fellowship at the Baylor College of Medicine. McKay’s research interest in the area of recreational psychoactive drug use includes a focus on the relationship between alcohol and drug use and academic outcomes.