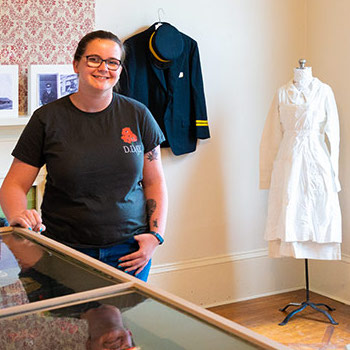 Though she’s just 21, Lillia Dockree is stuck in the past. It’s a good thing for a history student, especially one who has become such a valued staff member of the Brant Historical Society that she was given a chance to curate her own exhibit at the Brant Museum and Archives.

Dockree, who is going into her third year at Wilfrid Laurier University’s Brantford campus, curated Brantford in Uniform, an exhibit at the Brant Museum that will be on all summer. It explores Brantford’s history through clothing worn by people in a wide range of occupations.

“It was something that needed to be done and I had the time and the opportunity to do it,” says Dockree. “I was flying by the seat of my pants a little bit but I’ve seen my co-worker’s process when she curates exhibits and I did get some guidance from other co-workers as well.”

In addition to her on-the-job experience, Dockree drew upon her studies at Laurier. A public history course she took last semester was particularly helpful for its examination of museums, she says.

Dockree also took part in a recent Laurier field course, which took her to the battlefields of France and Belgium. Although she put together the exhibit before she left, the experience has helped her see artifacts, particularly the military ones, with new eyes. This helps her be a better source of information when people visit the museum.

“Instead of just seeing a jacket or a hat or badges, you see the person who would have worn them,” says Dockree. “It provides the human context behind an artifact.”

The Stories Behind the Clothes

One highlight of the exhibit is the Brantford Red Sox uniform worn by Jimmy “Seabiscuit” Wilkes, a Philadelphia-born baseball player who signed with the Red Sox in 1954 after a career in the Negro Baseball League in the United States. Wilkes ended up playing in Brantford for 10 years, during which the Red Sox were inter-county champions for five years. Wilkes died in Brantford in 2008 at the age of 82.

Another favourite of Dockree’s is the ornately embroidered Dufferin Rifles tunic worn by Lt. Col. E. D. Cameron in the late 1800s. The Dufferin Rifles of Canada were established in 1866 as the 38th Brant Battalion of Infantry. The current 56th Field Artillery Regiment, based in Brantford, traces its lineage to the Dufferin Rifles. Though the dress tunic was more likely worn in parades than on battlefields, its presence is a reminder of Brantford’s proud military history.

Some of the outfits on display are less clear in origin. One is a uniform worn by a nurse at the Brantford General Hospital during the 1940s. Though the original owner is unknown, the uniform symbolizes the significant contributions made by Brantford nurses, such as Katherine Maud MacDonald, who was the first Canadian nursing sister to be killed in action during the First World War, says Dockree.

Then there’s the clown suit. Probably dating from the 1930s to 1950s, Dockree found it in a bag of textiles in the attic. How it ended up in the museum collection is a mystery.

“It was a neat little surprise,” says Dockree. “It’s interesting to see people’s reactions to it when they come through the exhibit.”

Hands On With History

Dockree first worked at the Brant Museum as a high school co-op student. She was rehired as a summer student in 2017. The Brant Historical Society then found funding to keep her on. She works up to 30 hours a week all year round despite being a full-time student.

Her job is varied – other than having curated the exhibit, she makes regular visits to seniors’ homes for history presentations. She spends some of her time at the Myrtleville House Museum, also run by the Brant Historical Society, where she assists with school programs and summer camps. In fact, she gets involved with pretty much every aspect of Historical Society work.

Last year, the Brant Museum and Archives closed down for six months for an inventory. It took six months because staff members, including Dockree, had to go through some 60,000 artifacts accumulated over more than a century. They didn’t just count items – they catalogued them, including as much information as possible, photographed them and packaged them for storage.

A related project was clearing out and restoring an upper-floor room that had previously been used to store a wide assortment of metal artifacts.

“There were five racks that were about eight feet long and six feet high, and this room was absolutely filled,” says Dockree. “We had to empty it and we ended up peeling about nine layers of wallpaper off the wall as well as filling holes and fixing the plaster in the ceiling.”

The newly restored room could then be used for exhibits. Dockree’s exhibit is the second to be housed there.

The Value of Local History

Working at the museum has taught Dockree a lot about Brantford. When she was growing up, the city was economically depressed after the closure of a number of industrial plants. She remembers the horror film Silent Hill (2006) being filmed there because it required a decrepit downtown. Now that Dockree knows more about Brantford’s history as an industrial powerhouse, she can both take pride in that history and pleasure in the city’s renaissance.

“Knowing where you came from sets the basis for where you’re going to go,” says Dockree. “It’s still recovering but I do think Brantford is coming into its own. Laurier has helped.”

Not surprisingly, Dockree hopes to go into museum studies and curatorship after she finishes her undergraduate degree.

“Even as a kid, I loved going to museums, which everybody thought was a little weird,” says Dockree. “It’s really cool to be able to interact with the history of my hometown every day.”