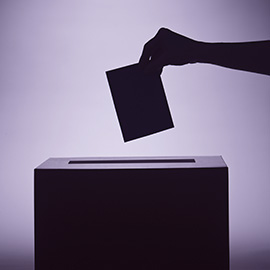 The Ontario election was full of twists and turns. Wilfrid Laurier University’s political scientists, including a group of students who served on the Global News Decision Desk, followed every one.

Associate Professor Barry Kay was seemingly everywhere. As the scholar most responsible for the seat projections of the Laurier Institute for the Study of Public Opinion and Policy (LISPOP), he took part in more than 80 media interviews with 24 different news organizations. He also served as an election analyst with Global News.

Four of Kay’s Master of Applied Politics students – Jake Gorenkoff, Jesse Toma, Connor Ward and Tom Wood – helped with the Global election coverage. Laurier alumnus Chris Cattle (MA ’04) also participated, as he has for several past federal elections. Under Kay’s leadership, the five of them looked at about 25 ridings each and projected a winner for each as early as reasonably possible.

“I’m sure it was a great experience for our students,” says Kay. “If I were in their place, I would have killed for that sort of opportunity.”

LISPOP received a lot of attention during the campaign. Starting May 15, 26,000 users visited its website over the course of the campaign, resulting in almost 110,000 page views, says Jason Roy, LISPOP’s director. Roy and his colleagues will soon post more analysis of the election based on a provincial election study the research centre fielded in the final 10 days of the campaign.

Roy also commented on the election campaign in the media, as did a number of other faculty members, including LISPOP Past Director Andrea Perrella, Kelly Gallagher-Mackay, John Milloy, Simon Kiss and Geoffrey Stevens.

Kay began developing the seat projection model at the federal level in the 1960s and has used it at the provincial level since the 1980s. In past elections, LISPOP’s projections have been accurate within four seats per party. Not this time, though.

What happened? Kay says LISPOP’s projections, based on polling data, were good. The polls, however, were off. The latest polls gave the PCs a one-point lead over the NDP. In the final result, however, the PCs managed 40.63% of the popular vote and the NDP, just 33.69%.

“Polling is getting worse all the time,” says Kay. “Because of telemarketing, because of caller ID, it’s a lot easier for people who are already being bombarded with telephone solicitations to avoid calls that aren’t from people they know. That’s had a huge impact on polling. Fewer than 10% of the population now respond to interview requests, as compared to some 75% over 30 years ago.”

Perrella was among those expecting a closer result. However, he can see reasons why the PCs may have performed better and the NDP worse than the polls indicated – though he points out the results were within the possible margins of error.

Liberal leader Kathleen Wynne’s call to vote for Liberal candidates without the prospect of her as premier may have induced some Liberal-leaning voters who may have been planning to vote NDP to switch back to the Liberals, says Perrella.

The NDP may have peaked too early, with strong polling numbers attracting increased attention – including negative attention that may have turned some people off voting NDP, says Roy.

“I think the NDP suffers a prejudice that doesn’t see them as strong financial managers of the economy, and with the budget that they put forward that had the accounting error, that simply reinforces some existing beliefs.”

It wasn’t just one party that ended up with a win in the election, says Kay.

“One can argue that there were three winners. Apart from the Conservatives, who were the obvious winners, the Greens, by winning a seat in Guelph, have established a degree of credibility. It was also a big night for the NDP. They didn’t do as well as they expected but they did terrifically by historical standards.”

The Liberal Party, meanwhile, dropped to seven seats, one seat short of keeping its official status as a “recognized party.” This reduces the public funding the Liberals can access for research, and limits their ability to ask questions during Question Period.

“An even bigger problem for the Liberals, however, may be that a number of candidates touted as potential future leaders, such as Yasir Naqvi, Charles Sousa and Steven Del Duca, lost their seats,” says Kay. “Though it’s possible a leader without a seat may be elected, such a leader would have more difficulty getting messages across.”

Will a Conservative government led by Doug Ford be “Trumpian,” as some commentators have said? Though Ford hasn’t expressed the kind of anti-immigrant sentiment that U.S. President Donald Trump has, there are some respects in which comparisons between Ford and Trump ring true, says Perrella.

“Both are populists whose success was driven a lot by economic insecurity. If you look around the world, politics is being shaken up because some people are making a lot of money and a lot of other people are just eking by. Eventually that breeds resentment towards the status quo so when you hear populist leaders like Doug Ford saying, ‘We need to challenge the elites who are taking your tax money,’ what he’s tapping into is this resentment.”

Of course, just because the Conservatives have won a majority doesn’t mean they will be able to do everything they want to do.

There are also high-profile Conservative moderates, such as Christine Elliott and Caroline Mulroney, who may exert a balancing influence within the new government, says Roy.

Still, Perrella sees populism tied to economic discontent as a global trend, one he’s made a major focus of his research. He wonders how this undercurrent will affect Canada’s federal election in 2019.

“The entire campaign was fascinating,” says Roy. “Many different events transpired that were somewhat extraordinary.”