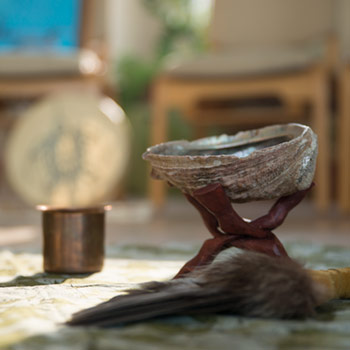 The sage smoke both fills the air and clears it.

One by one, the students and faculty members participating in the weekly Toward Right Relations gathering at the Waterloo Lutheran Seminary receive the smoke that seminary staff member Dorinda Kruger Allen offers them in the natural bowl of a shell. They draw it toward their faces, heads and hearts before turning and allowing Kruger Allen to waft it at their backs using a goose-feather fan.

As they participate in the smudging, there is a visible change to many of the faces. Lines soften. There is both solemnity and peace to the ritual.

“It’s a cleansing but I also think of it as a preparation to do what we do now,” says Kruger Allen, who is of Algonquin, British, Mohawk and German descent. “You come into the room carrying all the negative stuff with you from the day and when you smudge, you take the smoke from the medicines being burned and you clear yourself of all that so you can approach whatever it is we’re going to do now in a good way.”

Toward Right Relations is a series of noon-hour gatherings to promote reconciliation between Indigenous and non-Indigenous people. Though the core group of people who attend regularly are mostly from the seminary, the gatherings are open to all and have seen a range of people attend, including students affiliated with the Indigenous Student Centre. Not everybody participates in the smudging and that’s okay. What matters is being open to learning.

This is the third year Toward Right Relations has been running and in that time, Assistant Professor Mona Tokarek LaFosse, the current organizer, says it has helped bring her and other non-Indigenous participants toward a greater understanding of Indigenous issues, while Indigenous participants have welcomed the chance to share their cultures, histories and current issues.

“It’s changed my whole perspective,” says Pam McNeil, a non-Indigenous Master of Divinity student. “I volunteer at a camp for Indigenous children, especially Indigenous children who are at risk, so hearing the stories and learning the traditions here helps me relate to those children.”

“I started coming to get to know my Indigenous neighbours better,” says Brooklynn Lane, also a Master of Divinity student. “As I want to become a Lutheran pastor, it expands my own understanding of spirituality and traditions and how multiple traditions can live together.”

Most weeks, after the smudging, one of the regular attendees presents something on the yearly theme to the other participants. In the first year, which was coordinated by Instructor Debbie Lou Ludolph, the focus was on understanding the recommendations of the federal Truth and Reconciliation Commission. Last academic year, the theme was water, which Indigenous people hold sacred. This year, the theme is Indigenous art.

“The whole notion of it is that we’re learning about Indigenous ideas, worldview and other issues that help us get a better picture of the peoples of this land that have so much to offer us as non-Indigenous people in terms of culture, in terms of learning,” says Tokarek LaFosse.

Kruger Allen, who is a member of Mino Ode Kwewak N'gamowak, the Good Hearted Women Singers, often leads the group in song.

“The smudging and singing are part of the learning,” says Tokarek LaFosse. “We’re trying to come to understanding and also to relationship. We’re recognizing there has been a not-right relationship for a long time between Indigenous and non-Indigenous peoples.”

Tokarek LaFosse says the weekly gatherings are just one small part of starting the reconciliation process.  The Indigenous Student Centre hosts soup and frybread lunches on Tuesdays, which she and other faculty and students from the seminary enjoy attending. Once a term, the seminary engages in a “Circle of Dialogue,” an afternoon or evening when Indigenous speakers are invited to discuss an important issue with the community. This term, the event focuses on missing and murdered Indigenous women and takes place on Wednesday, Jan. 31 at 7 p.m. in the Paul Martin Centre.

In addition, instructors at the seminary have invited Indigenous speakers to classes and individuals may attend events such as the Walking with Our Sisters touring art exhibition honouring missing and murdered Indigenous women and girls – an exhibition Kruger Allen helped organize and also contributed some of her beadwork to.

Kruger Allen says Toward Right Relations has helped demystify Indigenous cultures for the students and faculty members who participate.

“I think a lot of our faculty and students are genuinely interested and humble enough to understand that they didn’t know enough,” she says. “More places should try it. Education leads to a better world, hopefully a more tolerant world.”

Toward Right Relations takes place Fridays at 12:30 p.m. in the Kanata Commons on the top floor of the seminary’s temporary location at 190 Lester St., Waterloo.