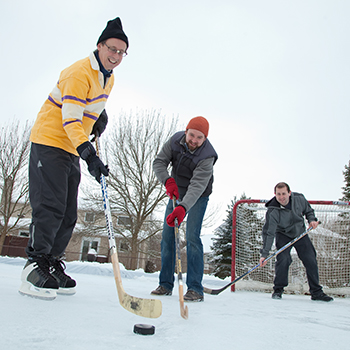 While a bitterly cold start to winter in many parts of the country may have given some Canadians the chills, the frigid weather warmed the hearts of outdoor skating enthusiasts.

"We got an early start in many parts of the country," says McLeman. "They were building rinks in Saskatchewan and Alberta in November and we started to see rinks in Ontario in mid-December."

Launched at Laurier in January 2013, RinkWatch offers people who love outdoor skating the chance to help environmental scientists monitor winter weather conditions and study the long-term impacts of climate change. RinkWatch users do so by submitting information about skating conditions on outdoor rinks in their neighbourhoods to the RinkWatch website.

Information submitted by RinkWatch users is pooled and analyzed by researchers to track the relationship between temperatures and skating activity, monitor winter weather conditions at local levels and predict the future impact of climate change on outdoor winter activities.

During its first five years, RinkWatch has received information about more than 1,400 outdoor rinks and ponds.

"We have a small core of a couple hundred users who will participate each winter, but to keep them coming back – especially after a warm winter like we had last year when a lot of people shut down their rinks – you have to remind them," McLeman says. "To get people to participate the first time is easy, but to keep them coming back year after year, that's the real challenge for a citizen science research project like this."

Each year, Laurier students working as part of RinkWatch implement a social media strategy to encourage public participation. Other initiatives, like the site's First Rink contest – which offers a prize for the first skateable rink of the season registered on RinkWatch – also help create awareness.

"We've had about a dozen students work on the project since we launched it," says McLeman. “It's a great opportunity for them to practice real-world research."

RinkWatch has also led to research that goes beyond gathering data used to monitor the impact of climate change. Students working under the leadership of Associate Professor Tim Elcombe in Laurier's Department of Kinesiology and Physical Education have been researching why people build outdoor rinks and the social motivation behind the activity.

That research led to the January publication of the journal article "Building backyard ice rinks in Canada: an exploratory study," by Laurier master's student Ashleigh Frederiksen, along with McLeman and Elcombe.

The RinkWatch team for 2018 includes site founders and associate professors McLeman and Colin Robertson, both in Laurier's Department of Geography and Environmental Studies, as well as PhD student Haydn Lawrence and undergraduate students Leanne Hirabayashi and Daniel Moll.

The project has garnered the interest of the National Hockey League (NHL), which in January sent a film crew to Waterloo to interview McLeman and Robertson about RinkWatch as part of a documentary film. The NHL crew also visited a backyard rink created by Laurier Associate Professor Steve MacNeil.

A new initiative as part of RinkWatch this year is McLeman's podcast RinkTalk, which features interesting interviews about backyard rinks, outdoor skating and other winter-related topics. McLeman has produced six episodes so far, all of which can be heard on the RinkTalk website.

"It's conversations with artists, or writers, or scientists and the kind of interesting things that they do related to rinks," says McLeman.

In addition to gathering valuable environmental data, RinkWatch has also developed into an online community of individuals who love creating backyard and community skating rinks.

"It tends to be families who will build a rink in their backyard or at the neighbourhood park – and they do it for the idea of the greater community good," says McLeman. "There's also the sort of spirituality of it that is almost universal. When you ask a parent who builds a rink what they personally get out of it, they'll say it’s a total Zen thing. They'll be out there on a really cold night with the hose going, the stars are out, it's really quiet in the world, and they just totally de-stress and decompress."