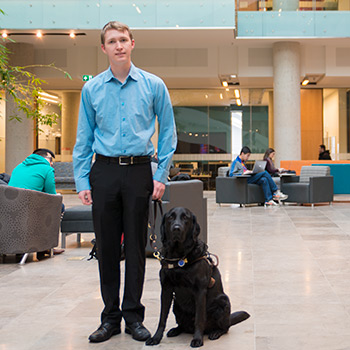 Laurier student with vision impairment advocating for accessibility and inclusion

Laurier student with vision impairment advocating for accessibility and inclusion

It’s a dinner at which students often have trouble finding their forks – and when they do, sometimes they lift them to their mouths only to find there’s nothing on them. Dinner in the Dark can be an awkward and sometimes messy affair. But it’s not some kind of novelty or joke. At the event, hosted twice a year by the Wilfrid Laurier University club Eye to Eye, students eat blindfolded to gain a degree of understanding of what it’s like to have a visual impairment.

The objective isn’t to inspire pity ­– far from it. An integral part of the event is a guided discussion that aims to inspire awareness, reflection and respect, says Jack McCormick, a fourth-year co-op business student and co-founder of Eye to Eye.

“We talk about inclusion and accessibility and we hope to build awareness so that when people are moving forward into their careers, they consider accessibility when they’re making decisions.”

McCormick is an honour roll student who has won numerous awards and scholarships for his extensive volunteer and leadership experience as well as his academic achievement. He also has a vision impairment.

McCormick was born with Leber congenital amaurosis, a rare degenerative disease affecting the eyes. He always had poor vision, but his condition worsened in his teens and he now uses a guide dog. He can see light, shadow and movement but can’t see the features of a person’s face even in good light. In poor light he sees almost nothing.

In a figurative sense, however, McCormick has always seen his path clearly. He co-founded Eye to Eye during his first year at Laurier. In addition to Dinner in the Dark, the club organizes speaker events often featuring people with disabilities who speak about their paths to successful careers.

In his business administration studies, McCormick is concentrating on human resource management and minoring in economics. Adaptive software built into his laptop reads to him at the fast pace he is accustomed to. Since he arrived at Laurier, the university’s Accessible Learning Centre (ALC) has been helping him to access materials and to work with his professors to ensure they understand his needs.

“Once a course is set up in an accessible way, I operate pretty much like any other student,” says McCormick. “The main thing is helping faculty understand what accessibility looks like in their class. I have a meeting with them and someone from the ALC before I start the class and I’ll say things like, ‘Make sure you say my name when I raise my hand because otherwise I’m going to sit there awkwardly and not know whether you’re pointing at me or the person beside me or if you’re even pointing in my direction at all.’”

There are still times when efforts at accommodation fall short of the ideal of putting McCormick on a level playing field with his peers. For instance, an external website he had to use for a class provided instant feedback to most students. But because it wasn’t fully accessible, McCormick had to submit his work to a teaching assistant, which meant he wasn’t able to get feedback until a day or so later.

Nonetheless, many professors have been “phenomenal” at ensuring they do all they can to enable him to succeed, says McCormick.

Making Connections On and Off Campus

McCormick says his time at Laurier has been fantastic outside class too. He has plenty of friends. He has been involved in many activities in addition to Eye to Eye – he has been a student support coordinator and event organizer for the Accessible Learning Centre, assisted with hiring and recruitment for Laurier’s Students’ Union, was vice-president of human resources for Laurier club Students Offering Support, and was on his residence house council in first year.

“I’ve been able to make phenomenal connections with so many people,” he says.

After living in residence in first year and off campus in his second and third years, McCormick returned to residence as a don for his fourth year.

“It’s probably the best thing I’ve done since becoming a student because it’s taught me so much and has been so rewarding,” he says.

McCormick has also had great experiences off campus. He worked at a summer camp for people with disabilities and has volunteered for organizations advocating for people with vision loss. As a co-op student, he has gained real-world experience at two placements, an eight-month term at the Ontario Ministry of Agriculture, Food and Rural Affairs in Guelph and a four-month term at BMO Financial Group in Waterloo.

McCormick plans to graduate later in 2018 and his exact plans are still unclear. However, he plans to focus his career on inclusion and accessibility, perhaps through working in human resources management.

McCormick also has another hope for his future. The United States recently approved a gene therapy for his condition that could stabilize and perhaps slightly improve his vision. Without any treatment, he is likely to lose his vision entirely, though it’s unknown how long that would take. McCormick hopes the treatment will soon become available in Canada or that he will be able to travel to the U.S. for it.

However, even if he does end up with further vision loss, McCormick puts the emphasis on his abilities, not his disability, and hopes to help others do the same.

“It’s not a tragedy to have a disability,” he says. “People can leverage their disability as an asset in the job market.”