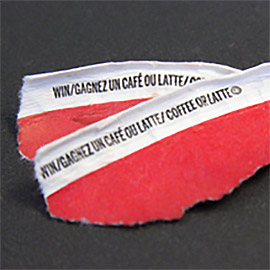 “A free coffee or donut may not mean much to the average person, but it can mean a lot to someone who is homeless.”

It’s the sentiment behind Cec Joyal’s annual campaign to collect food and beverage-winning Roll Up the Rim tabs from local Tim Horton’s goers and give them to those in the Waterloo Region experiencing homelessness.

A staff member at Wilfrid Laurier University’s Waterloo campus, Joyal gives the tabs to people who attend the Sunday-night supper program at St. Louis Roman Catholic Church on Allen Street East, where she volunteers. Joyal says it takes a few weeks after the contest starts in early February to receive enough tabs to provide each person with one food tab and one beverage tab.

The tabs, according to Joyal, offer a feeling that lasts longer than the relief of temporary hunger.

“The tabs allow someone experiencing homelessness to eat with dignity, inside the restaurant and out of the cold. Without a tab or money, they might not be readily welcomed inside.”

The idea for the now well-known community initiative came to Joyal 18 years ago as she handed her own coffee-winning tab to a man sitting outside of her go-to Tim’s location.

“I asked myself if something more could be done with these tabs,” recalls Joyal.

She began promoting the good-will initiative through a poster campaign at Laurier’s Waterloo campus. A few campus offices lent their support, hosting collection boxes for faculty, staff and students to donate their tabs.

For several years, Joyal coordinated the distribution of tabs through the Region of Waterloo’s Out of the Cold Programs, which offered an overnight stay in church gymnasiums or community centres to local people experiencing homelessness. Those programs ceased in 2015, and Joyal didn’t want to see those in need go without the food and coffee tabs they looked forward to. She’s been coordinating tab collection and distribution with her church group since 2016.

With the help of social media, people from across Ontario are familiar with Joyal’s story; she’s even received tabs from out-of-province. One Good Samaritan donated his prize-winning tab of a $100 Tim Horton’s gift card to Joyal. She used it to buy 20 five-dollar gift cards that were given out during the 2017 holiday season.