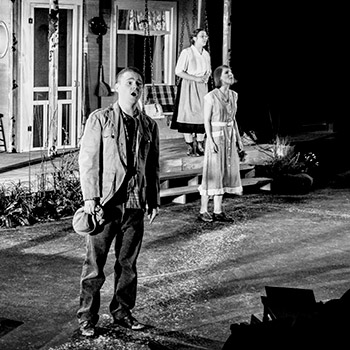 For many students, the winter term Reading Week offers the chance to catch up on assignments or hang out with friends. But for a group of students in Wilfrid Laurier University’s Faculty of Music, the recent Reading Week was anything but relaxing.

From Feb. 19-23, the group was in crunch mode behind closed doors of the Theatre Auditorium to put the finishing touches on their capstone course project – Opera Laurier’s production of Aaron Copland’s The Tender Land, which opens Friday, March 2 at 8 p.m.

Each academic year, voice students in MU298: Introduction to Opera, MU398 and MU498: The Practice of Opera, parts I and II, stage two productions – an evening of operatic excerpts around a unifying theme in the fall term and a full production with orchestra in the winter term.

The courses were designed by Leslie De’Ath, professor of piano and music director, and Kimberly Barber, associate professor of voice, the Faculty of Music’s associate dean: external and Laurier’s opera program coordinator. They offers students hands-on experiences to learn about and practice stagecraft, stage makeup and costuming, and all aspects of production from the physical set to stage management, publicity and marketing.

The courses also challenge students to be creative and resourceful during the production phase – time is limited by the academic calendar and set design, costuming, and lighting are governed by a tight budget.

But the limitations are what seem to inspire students the most, says Barber.

“Putting on an opera is a huge undertaking but our students aren’t deterred by the scope of work that’s involved,” says Barber. “They throw themselves in there, they work as a team and they grow.”

It’s why River Guard (BMus ’17), a student in Music’s post-graduate opera diploma program, is participating in Opera Laurier for the fourth time. Guard participated twice as an undergraduate student, once as a student volunteer, and now as a graduate student building his performance resume.

“Each year that I have sung with Opera Laurier, I have learned something completely different about the craft and myself as a performer,” says Guard. “Opera Laurier has taught me about personal presentation, about music knowledge, about being open to new ideas and challenges – and how to do it all with finesse.”

During his first Opera Laurier performance, Guard was asked to fill in at the last minute for a classmate who became too ill to perform. Guard took on the two mid-sized roles in L'enfant et les sortilèges in addition to his own role in Gianni Schicchi during the year-end double bill.

“This was one of the most terrifying – but rewarding – experiences of my performing life,” recalls Guard. “It taught me a valuable lesson about stepping up to opportunity and always being prepared, something which I now strive to be in every facet of performance.”

Guard will perform the role of Martin, the hired hand in The Tender Land, but stresses the importance of all roles required to make any performance come to life.

“Students are required to take on a variety of behind-the-scenes and technical roles in Laurier’s opera classes, which is fundamental to our understanding of all facets of the production,” says Guard, whose parents work in theatre (his father creates stage props and his mother is a scene artist). “It’s extremely important to respect the people who make you look amazing on stage and who make sure there's even a stage for you to sing on.”

From Campus to Creative Performance Career

Her previous experience as a student in Laurier’s opera courses, combined with her professional know-how, has been instrumental in the students’ preparation for the show’s opening on March 2.

“Amanda’s directorial skill and her ability to work successfully with the students has helped them grow as performers and ensured that they began acquiring the necessary stage smarts for The Tender Land,” says Barber. “It’s this cumulative training and experiential learning that allows them to be able to put on a major production in the second term of the course.”

“The vocal writing in The Tender Land is well within the students' skill set; it’s challenging enough without being too much of a technical stretch for any of them,” says Barber. “It also features good ensemble writing, which gives the students the opportunity to work together as a team onstage without the pressure of a solo part for students with less performance experience.”

Copland’s opera also offers a story line centred on finding love, wondering what the future holds, and perhaps most importantly, finding one’s voice – big themes that student performers and audiences can relate to.

The Tender Land opens Friday, March 2 at 8 p.m. in the Theatre Auditorium on Laurier’s Waterloo campus. Additional shows are scheduled for Saturday, March 3 at 8 p.m. and Sunday, March 4 at 3 p.m.

Tickets to The Tender Land are free for Laurier students and high school and elementary students, $20 general admission and $10 for seniors, non-Laurier university students and college students. Tickets can be purchased at the door before each performance, or in advance by emailing concerts@wlu.ca or calling 519.884.1970 x2432. Tickets are also available online through ticketscene.ca.