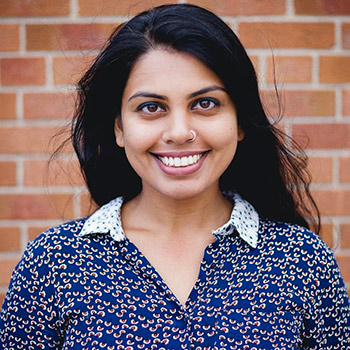 They are the children that many in Indian culture ignore. Deemed unworthy of a better life under India’s caste system of social classification, the children of Mumbai’s sex trade workers live in a world of risk, poverty isolation.

Menon, 31, is a student in Laurier’s community music program and the founder of the Yuva Arts Project (YAP), a tri-partner collaboration dedicated to eradicating the stigma attached to the children of Mumbai’s sex trade workers. This spring, the Yuva Arts Project will host eight children of Indian sex workers in Waterloo Region to help rebuild their self-worth and identities during two weeks of collaborative music-making, performance opportunities and most importantly, inclusion.

“There’s a mentality in my culture that affirms the caste system,” says Menon. “Some people see sex workers and their children as people who deserve to be as if prostitution is a necessary evil, so why bother to help them out of it. That’s the mentality we are trying to change with the Yuva Arts Project.”

“[The children] have endured so much but they are bright and eager to learn. They deserve happiness and dignity like any other child.”

For more than five years, Menon has volunteered with Yuva partner Prerana, an anti-trafficking organization in Mumbai’s red-light district. Prerana works to protect young women and children from being absorbed into the local sex trade by ensuring they attend school, have access to extracurricular activities and a safe place to sleep at night while their mothers are forced to go to ‘work.’

“Without intervention from groups like Prerana, these children will likely fall into the same trap as their mothers,” says Menon.

Pimps from Mumbai travel to countries of Nepal and Bangladesh in search of poor families with daughters. They offer marriage as a way out of poverty and promise families a better life for their female child.

It’s a story that differs grossly from reality.

The girls, now captive, are brought to Kamathipura, the at the of Mumbai’s red-light district. They are caged and given hormones, forcing their bodies to develop beyond their young years. Virginity is a coveted commodity in India and the girls are sold off to the highest-paying bidder. Their lives as unwilling sex trade workers and for some, single mothers, begin.

Menon led music classes for children at Prerana who have been born into these circumstances. Without bias, Menon taught them traditional Indian and English folk songs and helped them to write their own songs. Despite pleas from family members to volunteer elsewhere, Menon returned to the each week. The affinity for the resilient, creative young musicians at Prerana outweighed the opinions of others.

“I became very attached to these children,” says Menon. “They have endured so much but they are bright and eager to learn. They deserve happiness and dignity like any other child.”

“I applied to Laurier right away. It was an impulsive decision but I knew that learning here was exactly what I needed to help these children.”

Feedback from staff social workers indicated that Menon’s work was making a positive impact on the children. It sparked an idea.

“If music was helping to heal these children and make them feel valued, I asked myself what more I could be doing to keep that going; what else could I do for these kids?” says Menon.

Menon turned to the Internet and entered “music and healing.” Laurier’s Faculty of Music topped the list of search results.

“I applied to Laurier right away,” says Menon. “It was an impulsive decision but I knew that learning here was exactly what I needed to help these children.”

It Takes a Village

Menon, now in her third year at Laurier, has developed connections with professors and peers in the music therapy and community music programs that have been instrumental to the Yuva Arts Project experience.

“The project changes those who become involved with it,” says Gerard Yun, assistant professor in the Community Music program. “Being on the Yuva journey with Tamara creates a visceral sense of connectivity to the project and the children, even though we haven’t met them yet.”

Yun will lead workshops on contemplative music, introducing the children to mindful music-making practices. Colin Andrew Lee, music therapy professor, will focus on the therapeutic aspects of music, addressing its ability to heal, build stability and support mental health. The group will also sing with the Inshallah Choir, the multi-cultural, multi-faith community choir at Laurier’s federated Martin Luther University College, led by Debbie-Lou Ludolph. MT Space Theatre Company, a third Yuva project partner, will lead performance workshops while The Healing of the Seven Generations, an organization that supports those affected by the generational effects of the residential school system, will provide sessions on Indigenous culture.

“This is not easy work, but my support team is amazing,” says Menon. “None of this is possible without them.”

Olivia Maveal, Lisette Pineau, Sara Pickard Giorgia Benazzi are student members of Menon’s Laurier team, spearheading the project’s communications and fundraising efforts. They have secured $10,000 from the Students’ Union Student Life Levy to help fund airfare for the Indian youth and their two accompanying social workers, but more is needed. Even with the group’s accommodations gifted by a community group, the project still requires $15,000 in funding. A GoFundMe page has been created for online donations and fundraising events, which are posted on the Yuva Arts Project Facebook page.

Menon knows the project is ambitious and it has already presented challenges. But that won’t stop her, she says.

“I want the children to see that there is a way out. My hope is for them to go back to Mumbai and become leaders and show the rest of society what they are capable of. If they come out as successful individuals then society has no way but to change their minds about these kids.”