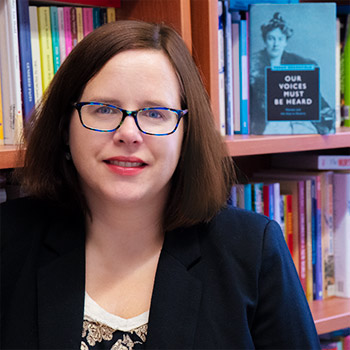 In the century since most Canadian women won the right to vote, it has become almost impossible to imagine women being denied a ballot on the basis of their gender.

In the 19th and early 20th centuries, however, gaining the vote was a lengthy struggle, as Tarah Brookfield, a Wilfrid Laurier University associate professor with the Brantford-based History, Youth and Children’s Studies and Social Justice and Community Engagement programs, chronicles in her new book, Our Voices Must be Heard: Women and the Vote in Ontario.

Initially, Brookfield had to be persuaded to tackle the topic. Though she had examined the suffrage movement as a graduate student, she had moved on to other topics, assuming the story was primarily about white, middle-class, relatively conservative women and had, in any case, already been told.

However, when trailblazing women’s historian Veronica Strong-Boag, whom Brookfield considers a mentor, asked her to write about the Ontario suffrage movement for a book series, Women’s Suffrage and the Struggle for Democracy, Brookfield had another look. Her research uncovered a movement that was more complex and diverse than she knew.

Women have been politically active in what is now Ontario since pre-colonial times.

White settler women were politically engaged too. For instance, during the War of 1812, Laura Secord became a heroine for walking 32 kilometres to warn the British of an American attack.

African-Canadian women were active in the anti-slavery movement as well as adding their voices to the growing movement for women’s rights. In the 1850s, Mary Ann Shadd, the first Black female newspaper publisher in Canada, used The Provincial Freeman to discuss women’s rights, including the right to vote.

The formal suffrage movement in Ontario began in the 1870s when Canada’s first female physician, Dr. Emily Stowe, who earlier in her career served in Brantford as the first female school principal in Canada West (Ontario), started what she called the Toronto Women’s Literary Club. Despite the name, the organization was from the beginning a political one.

The suffragists, while predominantly white and middle or upper class, were ideologically diverse. Some, like Stowe and her daughter, Dr. Augusta Stowe-Gullen, were highly educated women advocating for access to education and professional careers in addition to suffrage.

Other women became political to push for the prohibition of alcohol, which was seen as a women’s issue because drunken men sometimes abused their wives and children. The temperance activists came to champion suffrage in part because they felt prohibition couldn’t be accomplished without the vote, says Brookfield.

Many suffragists were relatively conservative, paying little heed to the rights of working-class women or women of colour. Some even used racist or anti-Semitic language to argue for women’s suffrage.

“They’d say, ‘Why do poor men or immigrant men have the vote but not us white women?’ Some were socially minded but often they were myopic in not looking at other forms of oppression or how they themselves contributed to oppressing others,” says Brookfield.

Some suffragists, however, were pacifists, socialists or otherwise radicals. Flora MacDonald Denison, for instance, was a prominent suffragist who championed free love, birth control, divorce and spiritualism in addition to suffrage, and sympathized with violent forms of activism.

The pace of change was slow and involved many steps forward and back, as Brookfield chronicles in her book.

In 1844, Laura Secord’s daughter, Hannah Williams, was among seven widows who defied convention – but not the law – to vote in the sprawling Canada West riding of West Halton. At the time, adult British subjects who owned property could vote. This excluded most women – but as widows, the West Halton seven, who included a Waterloo woman, qualified.

It turned out to be a close election and the losing candidate singled out the female voters as evidence of electoral fraud. In 1849, women were explicitly prohibited from voting at the riding, county and municipal levels. However, legislation in 1850 did not bar unmarried or widowed female property owners from voting for school trustees, and some promptly did.

As the movement for broader female suffrage gained traction, however, so did resistance to it. It was common for male politicians to assert that “the world would end if women had the vote because it would destroy the family and upset democracy,” says Brookfield. Some women also opposed suffrage in ways that were public and organized – indeed, political.

The First World War was controversial among suffragists. Some argued the suffrage movement should be put on hold so women could focus on the war effort. Others were anti-war and felt that “if women had the vote, they could avoid future wars,” says Brookfield.

Many women contributed to the war effort through volunteer and paid work, whether at home or abroad. This changed enough male politicians’ minds about the capabilities of women that the tide turned. In 1916, white British subjects in the Prairie provinces gained the right to vote. In 1917, British Columbia and Ontario women did too. Federal voting rights came in 1917 for nursing sisters and close relatives of soldiers, and were extended more broadly in 1918.

The suffrage movement did not end with the war. Women in some Atlantic provinces had to wait until the 1920s for the vote and Quebec women weren’t enfranchised until 1940. Asian men and women were barred from voting in some Western provinces until 1948.

First Nations men and women continued to be disenfranchised unless they gave up their Indian status or were war veterans. Edith Monture, from Six Nations of the Grand River, near Brantford, served as a nurse during the First World War. Until the Second World War saw more women enlist, she was probably the only First Nations woman allowed to keep her Indian status while gaining the right to vote, a right she exercised enthusiastically.

First Nations women were allowed to participate in and vote for their own elected councils in 1951, and in 1954, Ontario First Nations men and women gained the right to vote provincially without losing their Indian status. It wasn’t until 1960 that Indigenous people in Canada gained the unconditional right to vote federally and not until 1962 that ballot boxes were regularly brought to the Arctic for Inuit voters.

However, voting rights for First Nations women, and the women’s feelings about them, were complicated because of gendered rules that forcibly enfranchised women who married non-status men, with an accompanying loss of Indigenous rights, as Brookfield’s colleague, Assistant Professor Lianne Leddy, is chronicling in her upcoming book for the same series.

Today, women vote at slightly higher rates than men but still lag in representation at all levels of government, a sign that, a century after enfranchisement, there is more work to do on women’s political equality, says Brookfield.

“It’s still a very gendered political landscape. For female candidates, comments about their bodies or their minds often have gendered undertones. There are also barriers for women who want to pursue a political career and raise a family at the same time. Even now, it’s not an equal playing field.”