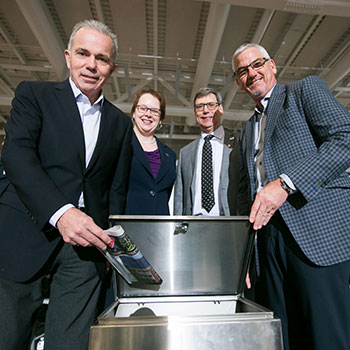 On Dec. 1, Wilfrid Laurier University and the YMCA of Hamilton | Burlington | Brantford co-hosted a celebration to mark the official grand opening of the Laurier Brantford YMCA. The jointly owned facility serves double duty as a long-awaited new community YMCA, and as an athletics and recreation centre for local postsecondary students.

Laurier President and Vice-Chancellor Deborah MacLatchy joined the YMCA of Hamilton | Burlington | Brantford President and CEO Jim Commerford, along with local elected Indigenous community leaders and representatives from federal, provincial and municipal governments, to commemorate this important milestone. After nearly a decade of collaborative effort, the Laurier Brantford YMCA is complete and open for use by community members and postsecondary students.

“As a university, we are keenly aware of the many social, mental and physical benefits our students and employees can enjoy by living active lifestyles, whether that be through competitive sport, recreational leagues, classes or individual fitness regimens,” said MacLatchy. “It is gratifying to see that our students are already making excellent use of the space. Five years ago, our Brantford campus students voted to support the Laurier Brantford YMCA through a levy on their student fees. The fact that our recent alumni contributed financially to a project that they knew would not be completed until after they graduated says so much about our student body, and is an incredible point of pride for me as president.”

The Skye Dancers from Six Nations of the Grand River performed during the event to welcome the community into the new space. Formal remarks were delivered by MacLatchy and Commerford, as well as:

The speakers expressed shared excitement for the new facility and the impact it is already having on the local community.

The overarching theme of the remarks shared with the 200 people in attendance at the celebration was partnership. This collaboration is believed to be the first of its kind between a university and a YMCA. The project made the leap from vision to reality thanks to cooperation between three levels of government, as well as the tremendous support and generosity of corporate and individual donors from the community.

“We want to express our gratitude to all of you in this room who made this possible,” said MacLatchy. “With a timeline spanning a decade, many hands, hearts and minds have been involved in making this project a reality. Whether you are a donor or funder, an administrator, a project manager or a tradesperson, this wonderful new facility is here today because of you.”

During the reception guests were able to view some of the 400,000 artifacts unearthed at the site during the pre-construction phase. Guests were also invited to capture their thoughts on the day on note cards which – along with several other objects – were placed in a time capsule that will be sealed into the wall at the Laurier Brantford YMCA. The time capsule will be opened in 2043.