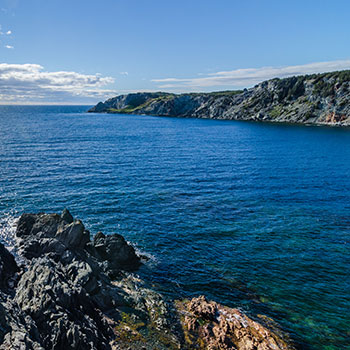 Christopher Lemieux, associate professor in Wilfrid Laurier University’s Department of Geography and Environmental Studies and newly appointed John McMurry Research Chair in Environmental Geography, is looking at this crisis as part of his research on climate change, land and marine protected areas and conservation standards.

In response to declining ocean health and as part of Canada’s commitment to the UN Convention on Biodiversity, the Canadian government committed to the international Aichi Biodiversity Target of protecting 10% of our marine and coastal areas by 2020. Right now, 7.75% of ocean territories are protected. Or so it seems, says Lemieux.

Upon closer look, Lemieux says measures to protect Canada’s salty waters are weak. Canadian jurisdictions are focusing on quantity over quality to hit the 10% target, misrepresenting just how much of our oceans are actually protected.

Protected areas have widely differing standards and regulations in Canada, which leads to different levels of protection. Some protected areas aren’t necessarily protected at all.

The International Union for Conservation of Nature’s (IUCN) definition of an MPA is: “A clearly defined geographical space, recognized, dedicated and managed, through legal or other effective means, to achieve the long-term conservation of nature with associated ecosystem services and cultural values.”

Most of Canada’s conservation agencies abide by this definition. However, some Canadian jurisdictions, such as Fisheries and Oceans Canada (DFO), appear to be making exceptions. For example, very few MPAs managed by DFO are fully protected, and most are open to some form of commercial activity, including oil and gas exploration.

“MPA standards vary, and most are too low,” says Lemieux. “Some MPAs lack adequate protection and some are poorly managed. This becomes problematic when trying to determine how much of Canada’s oceans are truly protected.”

Adding to the already low standards for MPAs, a lot of players are involved in conserving marine areas. MPAs can be created by several federal and provincial governments using a variety of legislation, designations, associated measures and regulatory tools.

“It’s challenging when many agencies are not abiding by the same standards,” says Lemieux.

In 2016, less than one per cent of Canada’s oceans were protected, compared to nearly eight per cent calculated today.

In December 2017, in an effort to meet the Aichi target of 10%, the DFO included marine refuges, or other effective area-based conservation measures (OECMs), in the calculation of Canada’s protected areas.

A marine refuge brings to mind a protected area with healthy ecosystems and absolutely no commercial activity. But according to Lemieux, many marine refuges are converted fisheries closures — established initially as a result of overfishing.

As new MPAs often take years or even decades to designate, it seems another qualifier is being added to existing standards of conservation in an effort to reach targets by 2020. This comes at the cost of effective conservation of biodiversity.

“The DFO is converting closed fisheries, some dating back as far as 1981, to OECMs, which are now being counted towards Canada’s conservation targets,” says Lemieux. “The definition of what counts as protected is being watered down. Essentially, the calculation of our MPAs went from less than one per cent to eight per cent overnight.”

While they have some merit, Lemieux says OECMs do little to protect entire ocean ecosystems — some allow commercial fishing and oil and gas exploration.

“By allowing these OECMs to be counted towards national and international conservation targets, Canada is reducing conservation standards and jeopardizing the long-term effective conservation of biodiversity,” says Lemieux.

Lemieux says the design of protected areas needs to be re-evaluated as well.

A lot of MPAs and OECMs are concerned with a single species — lobster for example. But, according to Lemieux, standards for protected areas should focus on the entire habitat and ecosystem.

“When you focus on a single species, it just doesn’t work. The goal should be to protect habitats that all species depend on, so interaction between species is maintained. Complex and whole ecosystems are more resilient,” says Lemieux.

The size of protected areas matters, too.

“Canada’s marine protected areas are all too small, they’re not connected and don’t span across different ecosystems. Science tells us that MPAs should be the opposite. Better designed, better located, larger and connected across various ecosystems,” says Lemieux.

More Than Lines on a Map

Protected areas are an important tool to halt biodiversity loss.

“Science and evidence indicate that protected areas are an effective tool to conserve biodiversity, but certain standards need to be in place to maximize effectiveness and ensure biodiversity persists over the long term,” says Lemieux.

According to Lemieux, marine environments need appropriate levels of protection based on the best available science.

“Canada should be striving for a high level of protection and high standards. It’s about quality, not quantity,” says Lemieux.

The highest standard of protection is no-take.

“Proper MPAs are like an insurance policy,” says Lemieux. “Not only do fully no-take MPAs maintain and restore biodiversity, but they also have collateral benefits. No-take MPAs deliver environmental, economic, social and cultural advantages.”

Yet only .11% of Canada’s ocean is protected by no-take standards.

Picking Up the Pace

Canada has immense opportunity to be a global leader in marine conservation, says Lemieux. Momentum is growing across the country for improving protected area networks. Governments and conservation agencies need to collaborate and seize the opportunity.

“As a developed nation, Canada should be leading the world in conservation. But we’re running out of time and space to establish an effective protected area network,” says Lemieux.