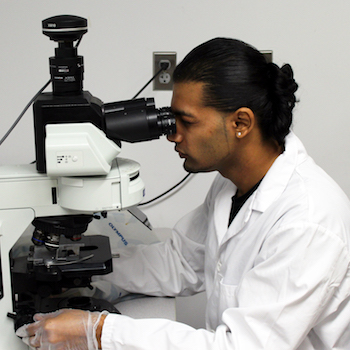 With an opioid crisis taking thousands of lives across the country every year, scientists are looking closely at the drugs involved: fentanyl, Oxycodone and heroin, among others. But improving our understanding of the brain’s reward system may shed light on why people become addicted in the first place, says Gehan Senthinathan, a PhD candidate in Behavioural Neuroscience at Wilfrid Laurier University.

In the lab, Senthinathan uses rats to study how and when behaviours become addictive. He gives rats access to sugar on different schedules and in different concentrations, studies their behaviour, and then analyzes their brains under a microscope.

“It's not the drugs, or high-calorie foods, it's you. It's you and how you’ve trained your system all your life.”

“Because drugs of abuse and natural rewards are processed by shared brain areas, we can approach the complex study of addiction with something as simple as sugar,” says Senthinathan, who shared his research in a winning presentation at Laurier’s Three Minute Thesis competition March 28. Since he’s studying the brain’s reward system, rather than a particular drug, Senthinathan’s findings can not only further our understanding of drug addiction, but also obesity, problem gambling and even romantic love.

“For whatever reason, consuming these natural rewards intermittently alters the reward system enough so that these animals begin to look at rewards differently,” he says. “Their system has changed.”

Senthinathan is also studying how age plays into the equation. Young rats, he’s finding, do not develop these addictive behaviours until around adolescence. These findings might explain why we don’t typically see addictions in children and why adolescence is associated with increased risk-taking, including drug use. They also underline the importance of developing good habits in childhood.

“What we put into our system may have dramatically different impacts depending on age,” says Senthinathan. “It's not the drugs, or high-calorie foods, it's you. It's you and how you’ve trained your system all your life.”