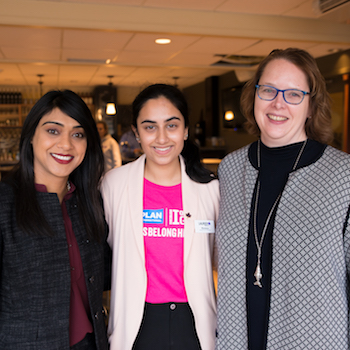 As befits a university president, Muneeza Sheikh sits down at her large desk and goes over her materials for the day. Sheldon Pereira, director of Wilfrid Laurier University’s Office of the President and Vice-Chancellor, joins her to provide a briefing.

On the agenda today: a meeting with the university’s senior executive team, a meeting with a faculty member from Laurier’s Centre for Women in Science, an inspection of a lab at the Centre for Cold Regions and Water Science, meetings with representatives of the Graduate Students' Association, the undergraduate Students’ Union, and the student-run Because I am a Girl club. There will also be lunch with Minister of Small Business and Tourism Bardish Chagger, member of Parliament for Waterloo, and some media interviews.

It will be a busy day – but that’s typical for a university president. It’s less typical for Sheikh, a 17-year-old high school student and participant in Plan International Canada’s #GirlsBelongHere initiative for the International Day of the Girl. She will spend the day with Deborah MacLatchy, Laurier’s president and vice-chancellor, learning from her and other senior leaders what it means to lead a large organization.

“I really have a passion for furthering girls’ rights. They deserve an equal opportunity to chase their dreams and pursue the career that they want to.”

Sheikh is one of 17 girls from across Canada and 500 around the world selected to participate in the Girls Belong Here initiative, which seeks to empower girls – and address the underrepresentation of women in positions of leadership – by having them “take over” a dream job for a day. Among the mentors this year are Prime Minister Justin Trudeau, Cheryl Hickey, host of Entertainment Tonight Canada, and Pamela Alexander, CEO of Re/Max Canada. Laurier is the only Canadian post-secondary institution participating.

“We know that for young women and girls, having mentors and role models is really important to them in seeing a pathway to everything that they have the abilities to achieve,” says MacLatchy. “I’m glad to play a small part to support this through this great initiative of Plan International.”

Sheikh is already a leader within her circles. At her high school in Milton, she started a Girl Up club to empower girls. She is also vice-president of the school’s Syrian Refugee Family Sponsorship Committee, which recently brought a family to Canada. As well, she writes for Her Culture, an online magazine and media site, and the Harvard College Leadership Review, as part of its High School Scholar initiative.

“I really have a passion for furthering girls’ rights,” says Sheikh. “They deserve an equal opportunity to chase their dreams and pursue the career that they want to.”

Though she came to Canada at the age of one and is of Pakistani heritage, Sheikh was born in Saudi Arabia, a country that only recently allowed women to drive.

“That’s part of what shaped my desire and passion for gender equality,” says Sheikh. “Coming from a place where it’s not really conventional for women to be this vocal about their rights, I think it’s super important to stand up for women’s and girls’ rights.”

“Coming from a place where it’s not really conventional for women to be this vocal about their rights, I think it’s super important to stand up for women’s and girls’ rights.”

With a supportive family, Sheikh’s goal is to become a surgeon. She was thrilled to be matched with MacLatchy because she is fascinated with biology and endocrinology. In addition to her leadership duties, MacLatchy is a biology professor who still maintains an active research program focusing on ecotoxicology, comparative endocrinology and fish physiology. Sheikh’s day included a guided tour of MacLatchy’s lab.

Given their shared interests, MacLatchy says she would be pleased to extend her association with Sheikh beyond a one-day event.

“I’d be happy to continue to mentor her and be part of her development as life goes on,” says MacLatchy.

Sheikh’s day included meeting other role models too, such as Chagger, who said she was delighted to meet the young woman.

Chagger commended MacLatchy for taking time out of her busy schedule to show a young woman that girls do indeed belong in positions of leadership.

“I’m proud of Laurier for providing this opportunity to a future generation.”