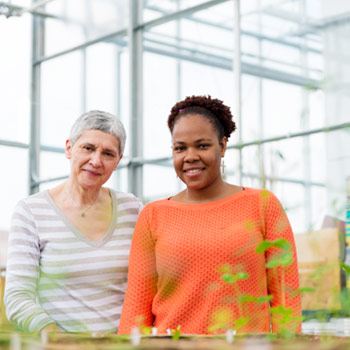 The tea and wine we drink have something in common besides their deliciousness. Around the world, the soil in which grapes and tea plants grow is becoming eroded, impoverished of nutrients and contaminated by pesticides. Now an international team including Wilfrid Laurier University researchers is working on ways to remediate it.

The project involves researchers in tea-growing regions of China, three industrial partners in Canada, which are also funding part of the research, and a number of graduate students including Guinel’s Integrative Biology student Renée Christie. The industrial partners are Boreal Agrominerals, Mikro-Tek and Hughes Vineyards.

Guinel and Christie’s role in the project is in part to reduce the use of chemical fertilizers. It’s an important goal because when chemical fertilizers leach out of the soil and into bodies of water, they can cause algal blooms. Algal blooms block light and deplete oxygen in the water, killing fish and other organisms.

“Right now the organic farmers are convinced but we also need to convince the others and without science, we won’t be able to convince them,” says Guinel.

Chemical fertilizers also only increase yields to a certain point before they plateau, says Guinel. “If you increase the amount of chemical fertilizer, the yield doesn’t increase, because the soil has not been taken care of. We have taken a lot from the soil without thinking of giving back to it in a biological way.”

Christie says researching alternative fertilizers was a major part of what attracted her to working with Guinel. “I could see the impacts of doing research in that area because not only do you protect the environment, there’s a human aspect, an aquatic aspect and benefits for the overall ecosystem,” she says.

Specifically, Guinel and Christie are evaluating the use of an agromineral, Spanish River carbonatite, to enrich the soil. Quarried in Northern Ontario, the carbonatite is rich in calcium and other valuable minerals, including phosphorus, and can be used as a natural fertilizer on both organic and conventional farms.

“There is a big problem that society is going to face very soon, which is that our reserves of phosphorus rocks are down and it is a non-renewable resource,” says Guinel, adding that phosphorus is an essential plant nutrient. “When the phosphate mines are done, there will be no more phosphorus for chemical fertilizers. We need to find an alternative.”

Carbonatite is found worldwide and can be used on a wide variety of crops. “If we can demonstrate that its use is beneficial to the soils, it could be part of the solution,” says Guinel.

Guinel and Christie’s research also involves growing different combinations of plants and microorganisms in the greenhouse at Laurier’s Centre for Cold Regions and Water Science.

Cover crops, such as alfalfa, chicory, red clover and oilseed radish, may be planted between principal crops, such as grapes or tea, to improve soil quality. As cover crops influence the microorganisms in the soil, the objective is to determine which ones, in what combination, are best to promote a healthy mix of beneficial microbes.

“Generally, the more diverse your environment is, the better it is,” says Guinel. “We have damaged the balance between the good and the bad microorganisms. It’s incredible how much a gram of soil can contain in terms of microorganisms but in a poor soil there isn’t a lot.”

Furthermore, just as humans live in symbiosis with the trillions of bacteria that make their homes in our bodies, microbes are essential to plant functioning, says Guinel. “When you study a plant, you are obliged to think that maybe it’s not a plant alone you are looking at.”

Vasseur, the principal investigator on the project from Brock, is working on reducing pesticide use.

Guinel and Christie say the wide collaboration – between faculty, students, universities, farmers, industry and countries – is a vital part of the project.

“We are all learning together,” says Guinel. “I had never really worked with farmers before this project and now I have a greater appreciation for their knowledge. We should really listen to what they have to say because they are the people in the field.”

Christie, who began her master’s program in January 2017, says she has already learned a lot from Guinel. “She has high expectations and she doesn’t just feed you the information; she forces you to work on your critical thinking abilities. At the same time she’s encouraging and caring, stretching her students to become great researchers.”

Though she’s not sure yet whether she’ll pursue a PhD after her master’s or work in industry, Christie, who also works with Vasseur, does know she wants to continue working on soil and environmental issues.

“Food is an important part of being human,” says Christie. “If the environment it’s growing in isn’t healthy and fertile, there will eventually be a scarcity of food. What I hope to do is take the knowledge I have to help farmers who want to preserve the environment while making a decent profit.”