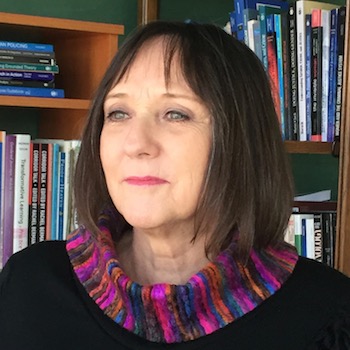 Women in policing, particularly mothers, still face a “boys’ club” that puts significant stress on them, both at work and at home. It impacts recruitment, retention and promotion of women – and even affects how police officers who are mothers parent their children.

That’s the conclusion of years of work done by Debra Langan and Carrie Sanders, both associate professors of Criminology at Wilfrid Laurier University, along with their former Sociology master’s student, Tricia Agocs (MA ’13).

Based on extensive interviews, Langan, Sanders and Agocs have published articles on women police officers with children – who they refer to as “police mothers.”

“The research has identified how the occupational culture is characterized by cynicism and hegemonic masculinity – a very masculine environment where things like physical strength, the suppression of emotion and the separation of work from family are predominant values,” says Langan, who is the principal investigator. “It makes for a very challenging situation for police mothers.”

Though women officers without children face significant challenges, additional pressures start from the moment they even contemplate announcing a pregnancy, says Langan.

Police mothers think that others see them “as a liability,” she says. Being assigned to light duties due to pregnancy is stigmatized – “and that devalued status often continues after they come back to work. Sometimes they’re demoted because they’re seen as not useful having been off for 12 months. They have to re-prove themselves when they come back.”

When they’re on maternity leave, officers can be subpoenaed to appear in court, where they can’t bring in their babies. They may thus face the additional challenge of having to find someone to look after a baby, even a nursing newborn, often on short notice. Under some circumstances, they may be called in to work.

“Maternity leave isn’t a protected time for them,” says Langan.

The nature of the job, in which police officers have to constantly anticipate danger and at times deal with dangerous or abhorrent situations, leads mothers to what Langan calls “danger protection mothering practices,” in which they try to avoid situations of possible danger to their children.

“If the public only knew how many crazies are out there or how many sex offenders are out there, everybody would be paranoid like we are,” said one police officer quoted in a recent article by Langan, Sanders and Agocs.

Some women spoke of drawing on their interrogation training when they talk to their children. Another officer quoted in the same article spoke of conducting an “inquest on bathroom time at public school,” with questions such as “Did anybody touch you at school today?” and “Where did you go to the bathroom?”

Women police officers also commonly set rules such as “no sleepovers” and “no boy babysitters,” says Langan. “Everybody worries about their kids, but certainly for police women, because of their first-hand experiences on the job, they’re seeing things a lot of us don’t see.”

The Second Shift at Home

Despite their stereotypically masculine jobs, women in policing tend to work what American sociologist Arlie Hochschild termed the “second shift” in 1989. This applies even when their partner is also a police officer.

“These women do the lion’s share of the domestic labour,” says Langan. “Their to-do list includes arguably everything. The overall management of the household, cooking, cleaning, managing the finances, childcare and scheduling – these jobs are primarily the woman’s responsibility.”

“Other mothers are doing this too but when you combine it with the other features of the police workplace, it’s really incredible how they do everything. It’s exhausting.”

For all the challenges mothers face, it’s actually gender, not motherhood, that has the stronger impact on the experiences of women police officers, says Langan.

All policewomen who participated in the research spoke of constantly having to prove themselves, a situation compounded by “the dilemma of not being feminine enough or being too feminine,” says Langan. “There’s no happy outcome to that.”

Langan and Sanders, with research assistant Julie Gouweloos, are now continuing broader work on gender and policing, which they will be presenting to nationwide police organizations with the goal of improving organizational structures to better support women officers.

There has been huge demand for their research, both from women officers who want to be interviewed and from police services that want to improve the recruitment, retention and promotion of women, says Langan.

While much work still has to be done to improve matters – in 2014, only 20.6 per cent of police officers were women, according to Statistics Canada – some police services have made significant strides in addressing a traditionally male paramilitary culture to make it more open to women, says Langan.

“This notion of cultures, in the plural, is important. Some services are better than others in terms of how the senior officers and leadership nurture a different kind of culture.”