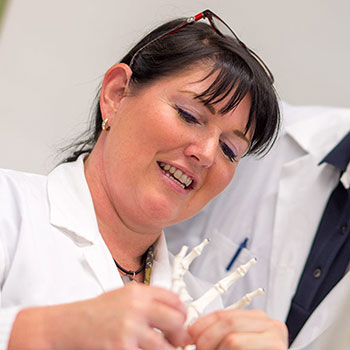 Assistant Professor Richelle Monaghan may be in the early stages of her career at Wilfrid Laurier University, but she has already made lasting impressions as a creative and passionate educator.

Monaghan joined Laurier’s Brantford campus in 2012 as the sole natural scientist, cross-appointed in Health Studies and Biology. Five years later, she is the recipient of Laurier’s Early Career Excellence in Teaching Award and the first recipient of the Gail Jenkins Teaching and Mentoring Award by the Human Anatomy and Physiology Society.

“I’ve really had the perfect combination of autonomy and support to help make science happen at our Brantford campus,” she says. “It’s been an amazing opportunity.”

While Monaghan teaches molecular biology, human anatomy, pathophysiology and is the head of science programming in public health, her focus is on connecting with her students, creating positive and collaborative learning environments, and being an effective instructor.

“I’ve been asking myself, ‘How do I teach most effectively for students coming from different places and with different learning needs?’” she says. “Pictures have helped me teach topics in human anatomy, but I can’t always rely on those visual cues.”

With a visually impaired student enrolled in one of Monaghan’s classes, she had to rethink her approach.

“There’s an incredible amount of content to cover in a short period of time,” she says. “But without visual cues, how could someone conceptualize blood flowing through certain arteries?”

Monaghan found a creative way — by having her class build the circulatory system with pipe cleaners.

Her approach was detailed in a poster — complete with Braille overlay — prepared by Monaghan, her visually impaired student, Kylie Caplan, and Clare Fletcher, a classmate and teaching assistant of Caplan. Titled “Pedagogical Approaches to Post-secondary Biological Sciences for the Blind,” the poster earned an honourable mention for the Mick Burt Award at the Canadian Society of Zoologists conference.

“I’ve had to learn and adjust my teaching to do what’s best for students on an individual level, which has improved the universal design for the classes I teach. Each student has made me a better educator.”

Prior to joining Laurier, Monaghan was a successful health care provider with a clinical focus on acute and chronic pain management. But curiosity led her to take classes at Laurier and she graduated with a BA in psychology.

“I took time away from work following a personal tragedy and enrolled in a few biology courses, which I loved,” she says. “I was invited to do my PhD at the University of Waterloo, but didn’t think I would be able to get a career in academia based on the climate for professors. I loved teaching as a teaching assistant, so I wanted to explore the possibility.”

After finishing her PhD in 2011, Monaghan applied to Laurier and got a teaching position.

As part of Monaghan’s approach to teaching, she has adopted the flipped classroom technique where students watch full lectures online prior to coming to class.

“I don’t do traditional lectures as much anymore — I think they can be a way to separate me from students as opposed to engaging with them,” she says. “So I use all kinds of activities like colouring, dancing and mind mapping. There’s so much integration in the human body that activities can really help explain.”

A few years ago, Monaghan spoke with Scott Nicholson, director of Laurier’s game design and development program. The conversation encouraged her to use escape-room concepts to teach problem-based learning for pathophysiology case studies.

“Students work in groups as though they’re health care emergency teams and are presented with a range of challenges found in their mystery boxes,” she says. “After completing the challenge I had students tell me they had no idea how much they had learned in the course — the gained so much knowledge and confidence.

“People don’t realize how much they’re learning when they’re having fun,” she says. “The fun factor also helps alleviate the anxiety that I find so many students are struggling with, which impacts their memory and cognitive functions.”

Monaghan loves to see students expand their horizons — and it is effective teaching that is part of what makes this possible, she says.