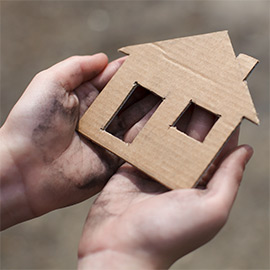 In Canada, more than 200,000 people are homeless every year. They are dependent upon emergency shelters and emergency and crisis services for health care and mental health treatment.

But what if there was a better way? A way to eliminate homelessness immediately and help those most vulnerable in our communities gain the support and resources needed to live a dignified life?

Wilfrid Laurier University Professor Geoffrey Nelson has addressed the issue of mental health and homelessness through a ‘housing first’ approach based on the premise that people who have housing are in a much better position to benefit from mental health and other support services.

“We need to help people because of our common humanity. These issues can happen to anybody. A good society protects its most vulnerable people.”

“When I started in psychology, there was a transition from psychiatric institutions to more community involvement, but there was still a lot of stigma around mental health,” says Nelson. “Initiatives such as Bell Let’s Talk Day have inspired hope; it’s easy to lose hope when you’re battling mental illness.”

Nelson’s passion for mental health support and awareness is largely a personal one, but he says the issues of homelessness and mental health are significant for all Canadians to help solve.

“We need to help people because of our common humanity,” says Nelson. “These issues can happen to anybody. A good society protects its most vulnerable people.”

Recently, Nelson served as the national investigator for qualitative research on the sustainability of the At Home/Chez Soi research project, a 2008 project funded by the federal government and led by the Mental Health Commission of Canada (MHCC) to assess the viability of a Housing First approach to homelessness.

The Housing First program sees participants offered housing immediately through rent supplements and supported through ongoing case management support services. The program is innovative in that it provides an alternative to emergency shelters and forms of housing that come with “strings attached,” like sobriety or medication compliance.

The study looked at 2,000 people in five cities for two years; overall, the results were overwhelmingly positive.

Over 60 per cent of the participants of the Housing First program remained in housing within the last six months of the study, whereas only 31 per cent of participants in current programs were housed all the time.

Through Nelson’s research, he collected personal stories from the project’s participants and received a grant to take the program into other communities to discover how the program might be implemented throughout Canada.

“At the end of the day, we saw that people wanted first and foremost to have their own home,” said Nelson. “But they also need guidance to learn how to become good tenants, community members, family members and citizens overall. That’s what this program is all about – getting people into a secure, consistent environment and then engaging with them to make a plan for how they want to work on their lives.”

Even though the program has many benefits, Nelson says the approach has its limitations.

“Housing First doesn’t cure poverty or mental illness; it’s not a perfect system but it’s been shown to work better than the system we currently have. Housing First is all about transitions: from street to home, from home to community and from past to future self. When we envision a future for ourselves, we have a life.”