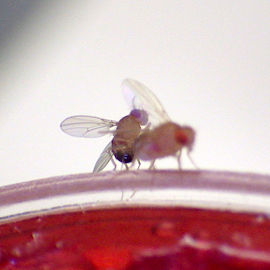 First, they preen. Fruit flies, especially males, spend a lot of time making themselves as attractive and nice-smelling to the opposite sex as possible by spreading their pheromones all around their body. Then they get jiggy wit it.

When they get a whiff of females nearby, males sing and dance. “They move around, going back and forth around the female, they extend their wings and shake them,” says Laurier biologist Tristan Long.

If the female likes the performance, she and the male will touch and lick to get information about each other. Then, if the date is still going well, the female will slow down and spread her wings. If the male isn’t up to her standards, she will fly away – female fruit flies are bigger than males.

Long, an associate professor in Laurier’s Department of Biology, studies sexual selection in fruit flies. He and his students are interested in the factors that shape mate choice, why different individuals make different choices, and what the consequences are of those decisions.

The Long lab has made plenty of advances in understanding the nuances of fruit fly sexiness. Understanding how they reproduce matters in situations such as combatting the invasive species Drosophila suzukii, commonly known as the spotted wing fruit fly.

While most fruit flies only lay eggs in rotting fruit, the spotted wing flies have a saw-like ovipositor – egg-laying organ – that they can use to attack fresh fruit. This makes the species a major problem for producers of soft fruit such as raspberries, grapes and peaches, says Long.

Fruit fly mating is surprisingly complex, says Long. For instance, like in many other species, males fight each other for the attention for a female. However, in fruit flies, the competition doesn’t stop when one boy gets the girl.

Female fruit flies have a multi-chambered reproductive tract in which they can store thousands of sperm. If a female decides she’d rather use another male’s sperm, she can actually squeeze out the unwanted sperm to favour another male’s, says Long.

For this and other reasons, males want to mate with as many females as possible to increase their chances of reproductive success.

Females, however, don’t necessarily produce more offspring just because they mate with more males. Therefore, there can be conflicts right down to the molecular level.

These proteins can increase the ability to produce offspring by inducing egg maturation and laying. However, they can also change a female’s physiology and behaviour in ways that are more beneficial to the male than the female.

For instance, some of the substances are thought to kill off a rival’s sperm or influence a female to delay re-mating, thereby increasing the chances that a given male’s sperm will result in babies.

“It does seem that females that mate more have shorter lifespans and ultimately produce fewer offspring because of these toxic side effects that come along in the accessory gland products,” says Long.

Some males produce more harmful substances than others. However, Long and his team have found evidence that the male offspring of the bad boys may be more successful than those of less dangerous males. Therefore, under different circumstances, a female may prioritize herself – or her sons.

There are plenty of other variables in mate choice. Different females appear to have different “types” – some prefer larger or smaller bodies; some are happier than others to mate with their relatives. Sometimes environmental factors – such as being in a smaller community – drive these choices but some preferences appear to be genetic, says Long.

So, has he learned anything about love by studying fruit flies? Long laughs.