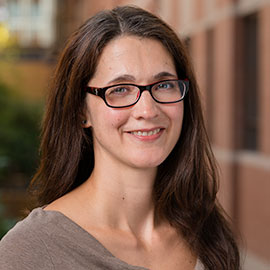 For the last 10 months, Wilfrid Laurier University Psychology Professor Anne Wilson has been a member of a distinguished national panel of experts working on a major review of the way the federal government funds fundamental science.

“What we reaffirmed was that we have a wonderful community of researchers in Canada,” said Wilson. “However, we address a number of concerns that research funding in Canada hasn’t been maximizing the potential of the research community to make important discoveries and to fully realize the benefits of excellent research for Canadians in general.”

According to the panel’s report, “by various measures, Canada’s research competitiveness has eroded in recent years when compared with international peers.” The report points to flatlined federal research spending as one of the causes.

Another major concern has been the shifting balance between fundamental research and more targeted, priority-driven research, said Wilson. “The panel report emphasizes that support for both these types of research is really important.”

"Over the past decade or so, proportionally more funding has gone toward priority-driven and industry-partnered projects. Although these initiatives are valuable, if they come at the expense of fundamental research it can constrain the capacity for new discoveries."

Minister of Science Kirsty Duncan launched the Advisory Panel for the Review of Federal Support for Fundamental Science in June 2016. Its objective was to ensure Canada’s research remains and becomes increasingly world-class, delivering maximum benefits both to the research community and to ordinary Canadians.

The aim was to understand where federal science funding is working well – and where there are gaps. It also considered if other countries have models that could address some of those gaps.

The panel reviewed a wide range of topics including the structures of granting councils and review processes, whether emerging researchers of diverse backgrounds are facing barriers, whether different elements of funding are appropriately balanced, and whether granting programs adequately accommodate international, multidisciplinary and collaborative research.

As part of its review, the panel consulted widely with the research community nationwide, including universities, colleges, individual researchers, industry and civil society, as well as with the general public.

The panel’s recommendations include improving the system of research funding governance so there is more consistency and communication between funding bodies. The report also calls for increasing funding in certain areas.

The panel was an independent and non-partisan body and its recommendations to the Minister of Science are non-binding, but Wilson hopes the federal government will make it a priority to increase funding for fundamental research.

“Over the past decade or so, proportionally more funding has gone toward priority-driven and industry-partnered projects. Although these initiatives are valuable, if they come at the expense of fundamental research it can constrain the capacity for new discoveries,” said Wilson.

Early-career researchers, including newer faculty, doctoral students and postdoctoral fellows, also need more access to funding, which is currently difficult for them to obtain, said Wilson. “We don’t want to see a generation of researchers lose out.”

Participating in the panel was “a really great experience” but also “an incredible amount of work,” said Wilson, who worked on the panel while fulfilling her full-time job as a professor, a Canada Research Chair in Social Psychology, a Fellow of the Canadian Institute for Advanced Research Successful Societies program, and a member of the College of New Scholars, Artists, and Scientists at the Royal Society of Canada.

“We spent a lot of time on it but I think it’s just so important for the Canadian research ecosystem of the future. I was really honoured to have the chance to contribute in that way.”

Other panel members were: