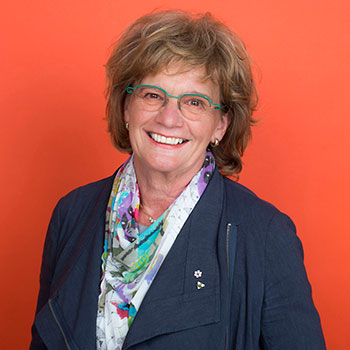 Brantford – Linda Schuyler, co-creator and executive producer of the iconic Degrassi television franchise, will share stories from her life and career during two lectures at Wilfrid Laurier University’s Brantford campus on Jan. 28.

Schuyler was inspired to create Degrassi during her time as a junior high school teacher. Her first Degrassi series – The Kids of Degrassi Street – premiered in 1979 and was followed by a string of hit Degrassi shows including Degrassi Junior High, Degrassi High and Degrassi: The Next Generation. In total, the Degrassi franchise includes more than 500 episodes that have aired in more than 150 countries. The Degrassi series has won accolades including the Peabody Award, International Emmys and more than 25 Canadian Screen Awards.

During her first lecture, titled “Head On... Reflections on Life,” Schuyler will speak about her childhood as a British immigrant growing up in Paris, Ont., coming of age during the counterculture and women’s liberation movements, her work as a junior high school teacher and career in the film and television industry. Schuyler’s second talk, “The Degrassi Story,” will focus on the origins and cultural impact of the Degrassi television franchise in Canada and beyond.

Schuyler’s appearance is part of the People Make History lecture series hosted by Laurier’s History Department at the university’s Brantford campus. The annual series, supported by funds from the late Mary J. Stedman, invites witnesses of historical events to tell their stories. Through this experience, students and community members connect to first-person accounts of history.

“The Degrassi television franchise and its portrayal of youth culture was important for several generations of Canadians,” said Tarah Brookfield, associate professor and People Make History coordinator. “Learning how Linda Schuyler came to be the co-creator of an iconic piece of Canadian culture will offer insight into the history of the Canadian television industry and Canadian women’s history.”

In addition to her work in television, Schuyler is a founding member of the Association for Media Literacy and has volunteered with UNICEF, Free the Children and Big Sisters. She was inducted as a member of the Order of Canada in 1993 and a member of the Order of Ontario in 2012. Laurier granted Schuyler an Honorary Doctor of Letters degree in 2015. Schuyler and her husband Steven Stohn have been active in the local community, including the preservation of The Bawcutt Centre, formerly the Paris Old Town Hall.

Schuyler’s Jan. 28 lectures are free and open to the community. Seating is limited and registration is required.