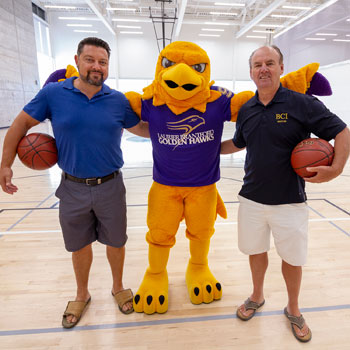 Brantford – It’s been 20 years since the City of Brantford officially became a university town. To mark this milestone, Wilfrid Laurier University is kicking off a year of 20th Anniversary celebrations, starting with Homecoming on Sept. 21. In recognition of the essential role that local grassroots support played in the establishment and success of the campus, the university is inviting all members of the community to take part in the festivities.

Homecoming kicks off with a “Party Like it’s 1999” gathering at Harmony Square, staring at 1:30 p.m. Admission is free, and there will be activities for all ages including a Kids’ Zone, a display of artifacts unearthed by archeologists at the Laurier Brantford YMCA site, giant-sized games, and campus tours. DJ Roger That will be on site spinning hit songs from the last 20 years, and vendors will be on hand selling food and refreshments.

At 4 p.m. celebrations move to the Laurier Brantford YMCA for a special Varsity Men’s Basketball Showcase. The Golden Hawks – including hometown favourite Matt Minutillo – will show off their prowess on the court in a skills demonstration before going head-to-head in an intrasquad match. Each squad will have two honorary coaches from the local community with ties to Laurier, education and youth sport. They include Ross Enslev, Mike Cleary, Dan Pace and Rob Innes. Performing the ceremonial tipoff will be Kevin Davis, mayor of the City of Brantford.

Since September also marks the first anniversary of the opening of the Laurier Brantford YMCA, the facility is adding to the celebrations, inviting community members to attend an open house that includes facility tours, free family swim from 12:30 p.m. – 4 p.m., free trial fitness classes for families and adults, and a draw for a free one-month membership.

“Laurier’s Brantford campus exists thanks to the efforts of the Grand Valley Educational Society and support from the City of Brantford, which provided us with our first home, the Carnegie Building,” said Deborah MacLatchy, Laurier’s president and vice-chancellor. “Community partnership was essential to our establishment here, and to this day that spirit of collaboration remains a constant at the Brantford campus. It’s only right that we celebrate our success with our friends, partners and neighbours who have been with us on this exciting journey.”

Tickets for the Men’s Basketball Showcase are $8 in advance for adults, or $10 at the door. Children under the age of 12 are free. Admission to the Party Like it’s 1999 celebration is free, but preregistration is appreciated. For tickets and more information, visit the Homecoming website.