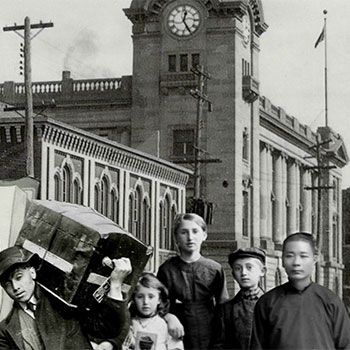 Brantford – The City of Brantford has attracted settlers from all corners of the globe throughout its history. A new public exhibit produced by Wilfrid Laurier University History students captures and retells local immigrant stories, providing a glimpse into the lives of individuals who often took great risks and made personal sacrifices on the journey to a new beginning.

The interactive displays included in Brantford: Our Immigrant Stories are based on extensive archival research undertaken by students, who studied the history of a dozen immigrant families from different cultural backgrounds throughout Brantford's history. The students worked collaboratively to synthesize information and present the families' stories in creative formats.

“While Brantford’s ‘official’ history largely focuses on its industrial and military past, as well as the accomplishments of individuals such as Alexander Graham Bell, this exhibit will bring to light marginalized and underrepresented groups in Brantford's past while promoting diversity and inclusion,” said Christina Han, associate professor of History and the curatorial supervisor of the exhibit.

Brantford: Our Immigrant Stories is separated into three sections. The first section, Life and Work, examines the entrepreneurial expertise of immigrant families. Included is the story of Antony Varon and his family, who immigrated to Brantford from Greece. The members of the Varon family worked at a restaurant called One Minute Lunch in the city.

The second section, War, examines the effects of war on immigration. One story included is that of William Errol Hart, who immigrated to Canada from India in 1904 when he was 19 years old. Hart was one of the first men in Brantford to enlist in the First World War.

The third section, Culture and Identity, reflects on culture brought to Brantford through immigration. Included is the story of Dr. Thomas Chiang, who came to Canada as a refugee in 1949. While he had served as a doctor in the Sino-Japanese War and Chinese Civil War, Chiang's medical degree was not recognized in Canada. He completed two years of additional schooling before working in Indigenous communities across Canada and serving as a hospital director in Six Nations of the Grand River Territory.

"This project has facilitated students’ learning of public history by helping them integrate and translate historical knowledge into creative and accessible formats," said Han. "And in a way that gives back to the Brantford community."

For more information about Brantford: Our Immigrant Stories, visit ourimmigrantstories.wixsite.com/brantford.