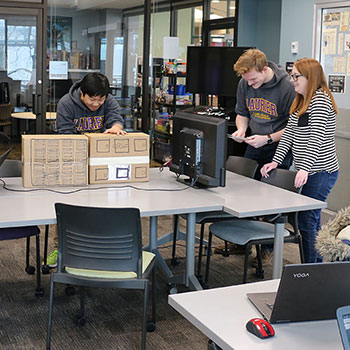 Waterloo – Five Game Design and Development students from Wilfrid Laurier University had the unique opportunity to present a series of escape rooms they designed to a group of international bloggers, media and invited guests at the second-season premiere of the Amazon Prime Original TV series, You Are Wanted, during an event May 16 in Germany.

The students, Edward Copping, Kaelan Dunbar, Austin Lee, Jellena Vulic and Robert Durant, developed the four rooms under the supervision of Laurier Professor Scott Nicholson and Postdoctoral Research Fellow Emily Flynn-Jones. The students, who are in their first, second and third years of the Brantford-based Game Design and Development program, had three months to design the rooms, which are based on the cybercrime theme of the You Are Wanted series.

“The hardest part was trying to make it easy enough for people at varying skill levels to complete within 10 minutes,” said Copping.

“It’s really important to fail fast,” said Durant. “Once you have an idea, you have to try it out, make a physical prototype and make sure it’s functional. Then you have to be ready to redo everything.”

Nicholson and Flynn-Jones recruited students who had experience playing a large amount of games and the different skillsets required to complete a project of this scope. Skills such as project management, public speaking, working with clients and on a team are essential to success.

“We know that what we design may not be the final design once they set it up in their physical space,” said Lee. “There are always going to be physical and budgetary constraints that you have to accept.”

“Game design is what I wanted to do my whole life,” said Copping.

Laurier’s Game Design and Development program has garnered international recognition since it was launched in 2015. Nicholson and his students have been invited to develop games for a number of high-profile events, including the Red Bull Mind Gamers world championship escape-room competition.