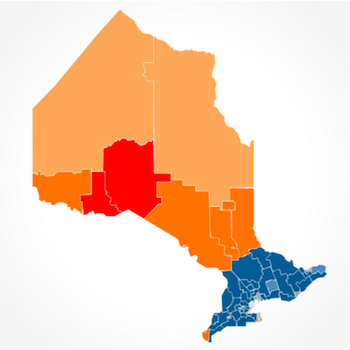 Waterloo – The Laurier Institute for the Study of Public Opinion and Policy (LISPOP) has published the first in its series of seat projections for the upcoming Ontario election. Based on four polls conducted between March 11 and 14, the projection puts the Progressive Conservative Party on top with a majority government.

Associate Professor Barry Kay of Wilfrid Laurier University’s Department of Political Science used a tried-and-tested method to determine which party’s candidate is likely to win which seat. An interactive riding map is available on the LISPOP website along with a brief explanation.

“The Conservatives sweep most of rural Ontario outside of the North, make serious inroads into suburban ridings around the metropolitan centres, and even crack into the city of Toronto, where they have been shut out for many years,” said Kay.

The method, which Kay has used federally since the 1960s and provincially since the 1980s, is based primarily on projected swings from riding-level results in the last election to the current election. The current projection is based on weighted data from Ipsos, Leger, Campaign Research and Forum polls, which together captured the opinions of 4,300 voters. Kay says LISPOP’s provincial seat projections have historically been accurate within an average of three seats.

Kay does caution that polls have become less accurate than in the past, in part because participation in opinion polls has fallen to less than 10 per cent of those contacted from 75 per cent 40 years ago. Furthermore, political momentum can shift significantly even in the last few days of an election campaign, as happened in the last federal election.

“However, I am reasonably comfortable that the polls were accurate for this period in March because they were fairly similar, averaging out to a 16-point Conservative lead,” said Kay.

Historically, polls tighten as an election approaches and Kay expects this to occur this time too – particularly because Conservative leader Doug Ford is new. LISPOP will update its seat projections regularly as more recent poll results come in.

“Mistakes by Ford could change things,” said Kay. “People basically have a read on Premier Kathleen Wynne, for better or worse, and I don’t think she will be able to change the dynamic of the election a whole lot. However, Ford is accident-prone. Things could change between today and tomorrow. They could certainly change over the next two and a half months.”

Kay does not see an NDP victory as likely but does see potential for the party to do better than currently projected.

The LISPOP model is detailed in Kay’s paper, “A Regional Swing Model for Converting Canadian Popular Vote into Parliamentary Seats: Improving Upon the Cube Law.”