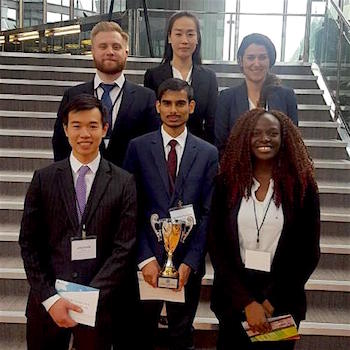 Waterloo – A team of students from Wilfrid Laurier University’s Lazaridis School of Business and Economics won the Bank of Canada’s third annual Governor’s Challenge, a national competition in which students take on the role of policy advisors who recommend what the Bank’s key interest rate should be.

This is the third year a Laurier team has made the final but the first year it has won. Twenty-five teams from across Canada entered this year with more than 100 students participating. Five teams were selected as finalists. Laurier is one of only two universities to have made the finals all three years of the competition.

“The success of the Laurier team over the last three years emphasizes and highlights the quality of the students at Laurier,” said Assistant Professor Christos Shiamptanis, one of the team’s two faculty advisors. “It showcases their strengths in terms of economic analysis, technical skills and communication, and it shows that at this university we do care about teaching as well as research.”

The Laurier team formed in September, consisting of fourth-year students Marieh Ghafari Rahbar, Salman-Hussein Hasham, Filip Lup, Joan Oginni, Jonathan Szeto and Kristine Zhang. The students immediately began identifying and analyzing current macroeconomic trends in Canada. They ultimately had to make a policy recommendation to keep inflation stable at the target of two per cent by raising the key interest rate, lowering it or keeping it unchanged.

The competition is composed of two rounds. The first round involved a 15-minute team presentation and question-and-answer session by videoconference in November. The finalists’ round took place in Ottawa on February 10 and involved a presentation and a question-and-answer session in front of a panel of distinguished judges, including a member of the Bank of Canada’s Governing Council. Bank of Canada Governor Stephen S. Poloz was also in the room observing all the finalists’ presentations.

Because the competition uses real, current economic data, the team had to redo all its time-consuming analysis between the first and final round to take the latest trends and events into account.

“We look at the current global trends and how they affect Canada, how consumers are reacting to the current economic environment and how businesses are interacting with each other and the government,” said Hasham, an Economics and Financial Management student. “We use different econometric tools to look at the entire picture of where inflation is going into the future and where policy directions will take us.”

The students’ “Plan A” recommendation is for the Bank of Canada to raise the key interest rate by 25 basis points in the third quarter of 2018, which would bring the interest rate from the current 1.25 per cent to 1.5 per cent. The Laurier team also recommended hiking the rate by a further 25 basis points in the second quarter of 2019. This recommendation assumes the economy will stay strong, which the students forecast as the most likely scenario.

“I think the students went into the competition feeling really good about themselves and what they had done,” said Associate Professor Ke Pang, the team’s other faculty advisor. “They were prepared. It was a steep learning curve for all of them but they did a fantastic job.”

The students credited Pang and Shiamptanis for their skilled guidance.

“They gave us the independence to do what we think is the best thing to do,” said Szeto, an Economics and Accounting student. “They guided us and gave us their thoughts but they weren’t pushing their opinions. They helped us and supported us.”

“The competition is a unique experiential learning opportunity for the students,” said Shiamptanis. “It challenges them to learn about the Canadian economy, the Bank of Canada, and about monetary policy beyond the classroom setting. At the end of the day, it’s not all about winning; it’s about the learning experience.”