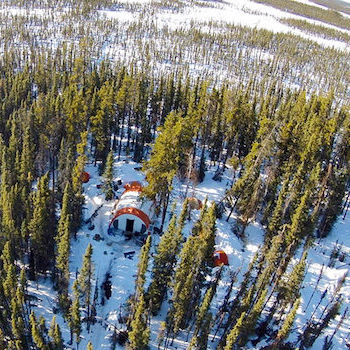 Waterloo — Three Laurier researchers are receiving funding from the Government of the Northwest Territories to help answer important questions about environmental issues in Canada's North.

Jennifer Baltzer, Derek Gray and Philip Marsh each received funding for separate projects as part of the Northwest Territories Cumulative Impact Monitoring Program, which aims to provide an understanding of environmental trends and the impacts of human and natural changes in the Northwest Territories. The goal of the program is to provide information to resource managers, governments and communities in the territory to aid in future decision-making.

“These environmental monitoring and research projects, which use scientific and traditional sources of knowledge, are critical for the future of the north and sustainable development in the territory," said Robert C. McLeod, the Government of the Northwest Territories minister of environment and natural resources. "A healthy environment is essential to the longevity of our land and for northerners now and in the future."

Baltzer received $120,000 for her continuing project, "Impacts of wildfire extent and severity on caribou habitat: from woodland to barren ground." Both boreal and barren ground caribou are facing unprecedented rates of disturbance within critical habitats in the Northwest Territories due to resource development. As a consequence, resource managers must consider the impacts of wildfire as a cause of additional disturbance. Baltzer and her team have established a network of study sites in a 250-kilometre radius around Yellowknife, where fires have affected a range of ecosystems, to examine the impacts of fire on caribou habitat. This is the fourth year Baltzer has received funding for her project from the Cumulative Impact Monitoring Program. She also received $120,000 in each of the past three years.

Gray received renewed funding of $98,000 for his project, "How will fish communities in Gwich'in lakes respond to climate change?" The project is examining how the distribution of fish in the Gwich'in Settlement Area and Inuvialuit Settlement Region will shift in response to climate change. To forecast future changes, Gray's team is collecting baseline data on fish communities and water quality in 60 lakes. Data produced as part of the project will provide information that can be used in the development of resource management plans. Gray also received $98,000 for the project from the Impact Monitoring Program in 2017.

Marsh will receive $60,000 for his project, "Changes in water within the Mackenzie Delta-Beaufort Region as indicators of aquatic health." The Mackenzie Delta-Beaufort Region is experiencing dramatic environmental changes, including climate warming and decreases in rain and snow levels. These changes have resulted in shallower snow cover, longer snow- and ice-free periods and increased evaporation. This drying of the environment is causing complex and poorly understood changes in stream flow and lake levels, as well as fish health and habitat. Marsh's study will use climate, remote sensing and water data to document changes.

"Laurier researchers are helping to solve real-world problems and providing recommendations that will shape how the Northwest Territories responds to environmental changes that are occurring at an increasingly rapid pace," said Jeffery Jones, Laurier's interim associate vice-president: research. "The university is proud of our partnership with the Government of the Northwest Territories and the important role our researchers are playing in Canada's North."

In 2010, Laurier signed a 10-year partnership agreement with the Government of the Northwest Territories to support the territories’ capacity to conduct environmental research and the training of highly qualified personnel in natural resources disciplines.