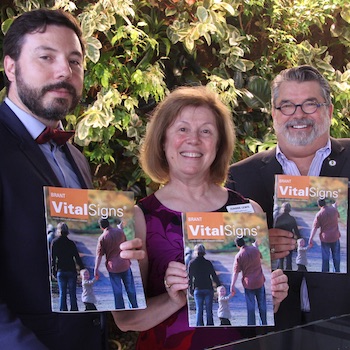 BRANTFORD – The Brant Community Foundation launched its inaugural Vital Signs report at an event held at Wilfrid Laurier University in Brantford Aug. 14. The Brant Vital Signs publication is a snapshot of the community at this point in time based on several measurements collected by Laurier’s research team.

The report includes measurements on 10 key community vitality indicators such as public safety, health and wellness, economy, environment and more.

“The data is not necessarily about giving a goal line to the community; it's more about presenting to the community what we know about ourselves,” said Popham. “This can help people think about what can be changed or what should be considered for the future.”

“As a community foundation, you want your grants to have the biggest impact by identifying what are the needs right now,” said Lewis.

For each of the 10 indicators, the report outlines important statistics, the current impact on the community, things to celebrate, things to improve and what community members can do to help. Health and wellness, public safety and learning were ranked as the top three priorities for community members.

A game allowing players to consider how grants are given to the community was also launched at the Aug. 14 event at the university’s Research and Academic Centre.

“The Laurier Game Design and Development program is exclusively focused on creating games for social impact and strongly believes that games are a powerful way of translating knowledge and making it accessible to more people,” said Flynn-Jones.

“This is the approach we took with Brant Builder, basing the choices in the game on real concerns and needs expressed by the Brant community in surveys and interviews. Local players will feel represented and can come away with a better understanding of the overall community.”

The game, which will be hosted on the Brant Community Foundation’s website, allows players to increase the happiness of a community by giving out grants to each of the four districts – rural, suburban, new development and downtown core. The goal is to give the grants to the region that it will suit best, increasing the happiness in each area and the overall community. The game allows the player to get a sense of the considerations that go into local philanthropic investment.

The Brant Vital Signs report is available in hard copy at the Brant Community Foundation office at 30 Brant Avenue. Those interested can also call 519-756-2499 or email info@brantcf.ca for a copy. The report will also be available digitally at brantcf.ca.