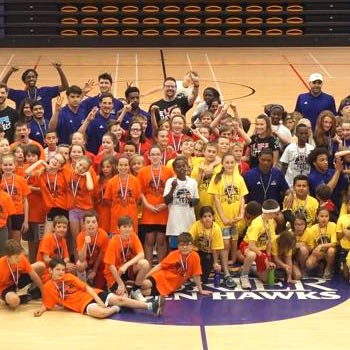 Waterloo – Nearly 500 students from 16 Waterloo Region elementary schools will be participating in a basketball tournament at Wilfrid Laurier University’s Waterloo campus the weekend of April 28-29.

Laurier’s Sun Life Financial Centre for Physically Active Communities (CPAC) is hosting the second annual tournament, which is for students in grades 4 to 6 at schools of the Waterloo Region District School Board. The tournament is the culmination of four months of basketball practices at individual schools. Katherine Katsambrokos, a child and youth worker with the school board, has been key in organizing the league.

“The main goal of the tournament, and of CPAC, is to promote healthy, active lifestyles to Waterloo Region youth,” said Nicole Vandermade, CPAC program coordinator. “Junior Ball-Stars was established in 2017 to provide at-risk students an opportunity to situate themselves on an equal playing field with their peers. The key focus of the league is wellness and physical activity to grow healthy minds and bodies.”

Students of a third-year Laurier Kinesiology and Physical Education class, Organization and Administration in Physical Activity and Sport (KP 344), have played a major role in organizing the tournament.

“Students have planned this event and have stayed after their exam period ended to run the tournament,” said Vandermade. “Additionally, the Laurier men’s basketball team have contributed immensely to the development and success of this event. They will be present at the tournament and will be running a bake sale with proceeds going to help their team with expenses. It is a true Laurier event with CPAC, men’s basketball, and the KP 344 class all helping to make this event a success.”

Event admission is $1 or the donation of a non-perishable food item. Members of the media and the general public are welcome, with no registration required.

“As the league’s mindset is to build healthy, contributing communities and global citizens, emphasis is placed on supporting local charities during game day,” said Vandermade. “Last year, the tournament generated 223 meals for the Food Bank of Waterloo Region and the selling of ‘My Life Matters’ T-shirts raised $350 for the Waterloo Region Suicide Prevention Council. Our goal is to surpass both those numbers this year.”