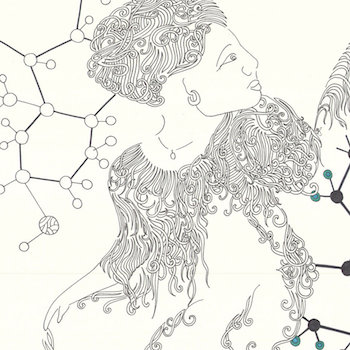 Laurier Centre for Women in Science celebrating fifth anniversary with evening of science, art and music

Laurier Centre for Women in Science celebrating fifth anniversary with evening of science, art and music

Waterloo – Wilfrid Laurier University’s Centre for Women in Science (WinS) welcomes members and hosts events rooted in the social sciences and creative arts as well as in the natural sciences. So it is only fitting that the centre’s fifth anniversary celebration will bring together visual art, music and science.

The WinS celebration will be held on Thursday, Nov. 16, from 5-7 p.m. at the Laurier Library on Laurier’s Waterloo campus. It will serve as the launch of the art exhibit, “Her Spacetime,” by Tharanga Goonetilleke, a renowned New York-based, Sri Lanka-born opera singer and artist. Goonetilleke will both sing and speak at the anniversary celebration, which will be followed by a reception.

Laurier Professor Shohini Ghose, director of WinS since its inception in 2012, met Goonetilleke when both were named to the prestigious TED Fellows program in 2014. However, it wasn’t until several months ago that they began talking about collaborating to celebrate women in science.

“We developed this interesting idea of creating artwork that explores the stories of women scientists from all over the world. So she’s created these unique new art pieces that reflect five women from different disciplines who we felt have compelling stories,” said Ghose.

WinS promotes the participation of women in science through research, collaboration, networking and outreach. The centre has organized conferences, speakers and workshops; provided awards and funding to students studying science or gender issues in science; collaborated with other institutions and helped other groups to develop similar initiatives; and presented innovative public events such as graduate student Eden Hennessey’s #DistractinglySexist and #DistractinglyHonest photo-research exhibits focusing on sexism in science.

“We’ve realized over the years that we need to get the message out on inclusivity and diversity and science, not just through research and academic talk, but to reach the wider community because it’s a matter of cultural change and perception change,” said Ghose. “To address that, we try to combine research outcomes with more interesting ways of communication, like art.”

“This is about community building. It’s about not being alone and isolated, which is often why women in science feel they don’t belong,” said Ghose. “Building identity and a feeling of connection feeds into everything they do, including their science.”

Ghose says she’s proudest of how students involved in WinS have benefited from the centre over the years.

“Some who have been funded for conferences and research write letters back telling us it has changed the outcome of their research or directions of their careers,” she said. “It’s a message saying, ‘Yes, you deserve this award; we believe that you belong in science and you’re going to go all the way.’”

The Centre for Women in Science fifth anniversary celebration is free and open to the public. Those who plan to attend are asked to preregister by emailing wins@wlu.ca.