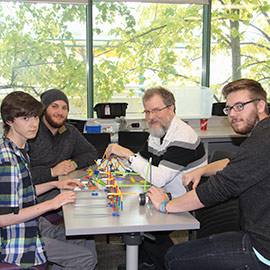 Brantford – Gaming enthusiasts from 22 countries will gather in Budapest, Hungary on March 25 to test their wit and skill in the first-ever escape room world championships, presented by Red Bull Mind Gamers. As the competitors race against time to successfully complete the challenges in the escape room, titled Mission: Unlock Enoch, they’ll wrestle with riddles, clues, puzzles and problems designed to perplex by a team from Wilfrid Laurier University’s Brantford campus.

Scott Nicholson, professor and program coordinator at Laurier’s Game Design and Development program, and three of his students spent the summer of 2016 in the BGNLab (Brantford Games Network Lab) modelling and testing every element of the Unlock Enoch escape rooms. The students — Robert Durant, Sean Harrison and Chris Tenuta — are undergraduates in Laurier’s Game Design and Development program.

The story behind Mission: Unlock Enoch is inspired by MindGamers, a feature film slated for release in March of 2017. In this sci-fi movie, a group of students discovers a wireless neural network, connected via a quantum computer, capable of linking all minds and of using one person’s mind to control another’s body. Players in Budapest will immerse themselves in the world of MindGamers, and the quantum-computing theme will be woven through some of the challenges.

“Our goal was to create challenges that made sense within the world of quantum computing, combine physical and mental elements, convey a consistent story, reduce dependence on a specific language, and be engaging for viewers,” said Nicholson. “Both participants and viewers of the show will learn something about quantum computing through the challenges we have designed.”

During their design work, the Laurier team built physical prototypes for many of the challenges and also turned to digital tools to test their ideas. Once tested and finalized, the designs and prototype models were sent to a development team in Europe, which constructed the sets for the event in Budapest. Aspects of the design process were captured by videographers in Brantford to create video blogs, which will be posted online in the weeks leading up to the event. The videos can be found on the Brantford Games Network blog.

“Having students involved in the design of this escape room was beneficial for everyone,” said Nicholson, a globally recognized leader in escape-room research. “They had the chance to work on a project that will literally be seen around the world, and the game itself benefited from having their perspective as young people on what would make for interesting challenges and compelling viewing.”

Nicholson will be flying to Budapest for the championships, and will be providing colour commentary during the broadcast. A viewing party is planned at the BGNLab so that the campus community can watch live as the competitors tackle the challenges designed by the team at Laurier on March 25 at 3 p.m.