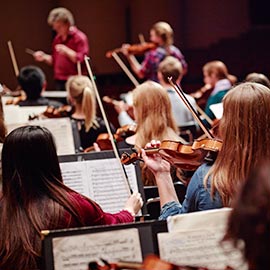 WATERLOO – It has been 40 years since the Faculty of Music opened its doors at Wilfrid Laurier University. To celebrate, the faculty will present a series of concerts and events on the university’s Waterloo campus and in the Waterloo community to recognize Laurier alumni, faculty and students.

Since 1975, the Faculty of Music has grown from 69 students in one undergraduate program to over 400 students across seven degree and diploma programs at the undergraduate and graduate levels. Laurier also operates the Laurier Conservatory with over 1,000 students, is home to the National Youth Orchestra of Canada and has been named Canada’s Best Music Campus by CBC Radio.

“This anniversary presents a wonderful opportunity for us to reflect on the long way we’ve come since 1975 and to look ahead to innovative programming and other exciting initiatives planned for our future,” said Glen Carruthers, dean of the Faculty of Music. “Laurier’s Faculty of Music has positioned itself over the past 40 years as a top music school in Canada, attracting students from all over the world. We are very proud of what we do here and hope the many special events this year will provide everyone in our community with a chance to celebrate with us.”

The following special events are planned between January and May:

The Kitchener-Waterloo Symphony will collaborate with a group of outstanding soloists, including Laurier voice alumni Benjamin Covey (BMus ’04, OpDip ’05), Adam Luther (BMus ’04, OpDip ’05), Joseph Schnurr (BMus ’04), Tyler Fitzgerald and Jennifer Taverner (BMus ’02), alongside current faculty Kimberly Barber. The soloists will be joined by the combined student choruses of Opera Laurier, Laurier Singers and the WLU Alumni Choir. Die Fledermaus, frequently performed on New Year’s Eve in Vienna, is a champagne-filled romp that is always a crowd-pleaser. The opportunity for current voice students to share one of Canada’s finest stages with so many prominent alumni and a first-class orchestra is certain to be a highlight of their time at Laurier. Special ticket prices are available for friends of the Faculty of Music; contact choosemusic@wlu.ca for details.

A second voice-centred event is Opera Laurier’s much anticipated fully-staged opera production in February. The cast is comprised of Laurier voice performance students enrolled in the The Practice of Opera course. The opera will be conducted by none other than Raffi Armenian, a world-renowned musician and beloved past music director of the Kitchener-Waterloo Symphony. He will lead Laurier’s first-ever production of Janáček’s delightful Cunning Little Vixen in a production designed and directed by Canadian Brent Krysa.

From April 2-3, NUMUS (New Music Now) and the Faculty of Music will present "In Celebration.” The strong relationship between NUMUS and Laurier’s Faculty of Music goes back three decades to when Laurier composition professor Peter Hatch founded NUMUS in 1985. "In Celebration" will feature the world premiere of a major work for chorus and orchestra titled, Babel, composed by Laurier alumna Stephanie Martin (BMus ’85). "In Celebration" will also feature the premiere of a work by Glenn Buhr, Laurier composition professor and former artistic director for NUMUS. His Piano Concerto No. 3 will be performed by Laurier alumnus Keenen-Reimer Watts.

On April 5 instructor Leslie Fagan and coach-accompanist and alumnus Lorin Shalanko will launch their Canadian Art Song CD, Thread of Winter. This CD was created  with help from a Wilfrid Laurier University Research Support Grant. The Canadian Art Song repertoire that was chosen for this recording resonates with Fagan and Shalanko for its accessibility to young singers. Fagan and Shalanko are hopeful in the future their recordings on Canadian Songbook can be used as a reference tool for teachers and students. Join us to celebrate this wonderful accomplishment by two of our finest!

"Mozart Mania" is another exciting anniversary event that will take place the weekend of May 13-15. The event invites all Laurier alumni to join in a weekend of singing, reconnecting and creating new Laurier memories. This event will allow alumni another chance or a first chance, as the case may be, to sing a beloved work, the Requiem by Wolfgang Amadeus Mozart. Alumni involved in the event include Mark Vuorinen (BMus ’98), Sandra Horst (BMus ’88), Stephanie Martin (BMus ’85), Brandon Leis (BMus ’04, OpDip ’06, MACM ’15) and many more. Donations collected at the final concert, which takes place at St. Andrew’s Presbyterian Church in Kitchener, will be added to the fund that generates the WLU Alumni Choir Scholarship.

To find more information or to register, visit the concert calendar.